Just having one of my turns. Here's some of the medicine I've been taking:

Arts & Letters Daily points to an existential explanation from John Gray as to why I am having difficulty getting out of bed at the moment.

And ten things you don't know about orgasms, including differing opinions on the Upsuck Theory and how (and why) to titillate a pig:

On the subject of pigs, how to make homemade bacon and a business scheme where one can delegate the spadework to bring home some organic bacon.

Bernard Hickey saves the taxpayer spending truckloads of dosh with Treasury, Tax Reform oligarchies and special consultants by listing ten ways to clean up the tax code and stop Industrial Disease. All good points, but am curious about the Hong Kong property tax as opposed to a capital gains. Neville Bennett goes on about it a bit over at Ratesblog too.

And oldie from MacDoctor, but a telling chart of how residential electricity prices have been trending ever upwards since 1984, while commercial and industrial users have remained relatively flat. I write this literally crouching over the 1kW oil column heater gripped between my legs. Can't wait for that insulation, eh.

In as much as it could be compared with the change in residential and commercial rates differentials in local council budgets, both trends show households taking over the burden of infrastructure and social spending, whilst businesses get their tax deductible rates bill cut. Time for some quid pro quo, and something to keep in mind over the Super Auckland plans.

Whose favourite punchline is "I didn't do it, no one saw me do it, you can't prove anything"?

a) Bart Simpson
b) Richard Worth
c) David Bain

And finally, everyone else is doing it. Here's the results on the latest Political Compass meme doing the rounds, as well as the Facebook schema:

My Political Views
I am a left social libertarian
Left: 3.65, Libertarian: 5.37 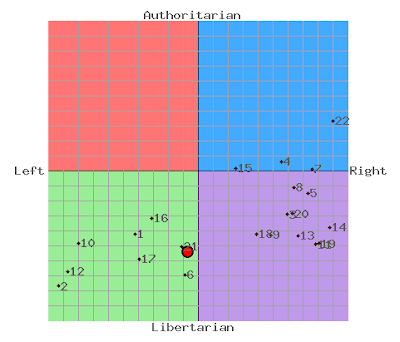