Wishing you a Green Xmas 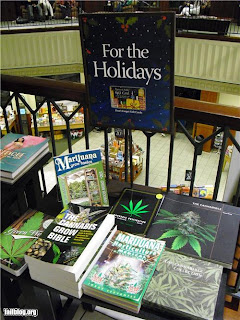 Nicked from here
With a bit of luck and a pinch of getting-the-shit-together, goNZo Freakpower will return in 2011. Merry Cannabis and a Hippy New Year.
Posted by Will de Cleene at 09:10

Paul Quinn, Creep of the Year

National MP Paul Quinn wins the inaugural Creep of the Year award. His outstanding contribution to pond scum this year came with his repugnant private member's bill stripping the vote from all prisoners, which gave parliament a chance to show how low they can go.

Bizarre and inane speeches in the House in support of the bill, whitewashed select committee hearings, the stomping on the Bill of Rights. Shame on the pussy-whipped National MPs who block voted in support of it, but it's hardly the first or last time their pragmatism will trump principle.

Parliamentary perks and the swathe of law passed under urgency was bad enough, but it is small beer compared with a mass disenfranchisement of the population. The precedent opens the door to future disenfranchising of any other politically vulnerable sector of NZ citizenship.