Back in the dawn of the 1980's, my old man tried his hand at running kiwifruit on a farm out west of Tauranga. We lived in caravans next to the shed, right across from the neighbour's battery chicken farm.

The neighbour's dog, a mangy beast with something short of a full Labrador in him, used to wander onto the farm and hassle our dogs, two German short-haired pointers called Kaiser and Rommel (like another certain disruptive entrepreneur, the old man liked his Germans). Kaiser was a 12 year old former gun dog champ, brown-coated and freckled with white patches of hair. Rommel was not even three, dark liver hair and whippet thin.

After a week of skirmishes between men and dogs, where the dog kept coming across the fence and my old man kept telling the neighbour he'd put a .22 bullet behind its ear, the day of the final dogfight arrived.

The old man was out on his tractor working on one of the nearer blocks. The dogs were with him, and it wasn't long before the neighbour's dog caused trouble. It had caught Kaiser unawares and had latched onto the old dog's throat. Out of nowhere, Rommel zipped in and nipped the dog firmly on its arse. The dog yelped out of pain or surprise, giving Kaiser his escape. It turned to see the source of counter-attack already halfway across the block.

Nor did the dog see the bullet that hit him. It yelped in receipt of it and retreated to less painful territory, limping badly and leaving the old man wondering whether the wound was mortal or merely a winging. Rommel and Kaiser preceded the old man on his tractor back to the shed by a good minute, seemingly none the worse for wear.

The old man put the rifle away and went across to tell the neighbour the news. The neighbour accepted the dog's fate, and we all went out searching the borders of both lands looking for the missing hound. I found him, curled up on a corner section under a tree as if sleeping. The neighbour took the dog away, to a grave or an offal pit is uncertain.

Kaiser and Rommel lived largely happy lives until they died. Kaiser was put to sleep aged 16 years after his legs gave up. Rommel went walkabout off the farm a few years after this summer skirmish, presumably ending up with a short life span in the illegal dog fighting circuit. He was always a better runner than a fighter.

Email ThisBlogThis!Share to TwitterShare to FacebookShare to Pinterest
Labels: gonzo

The old man and I were walking along Mayoral Drive in the Auckland CBD one afternoon back in the '90s. Another even older man had just walked out of the Pan Pacific Hotel and headed towards us. My father, aged sixty-mumble, did something I'd never see him do before.

He lost the expression of a man wearied by sixty-odd years on the clock, and reverted to a mumbling child as he praised former child actor Mickey Rooney in person. This crinkly polite Yank - accosted on the streets in a strange land by some quixotic stranger in the three piece armour of an attorney - had brightened my Dad's day considerably.

Needless to say, Mickey Rooney's golden days of Hollywood were a bit before my time. Growing up two generations prior to my existence, the old man grew up on tales of conquest by proxies of the British Empire in books, as well as the pulp fiction churned out by Hollywood, leeched as it was of reality by the censors and purveyors of moral rectitude.

The Ten Commandments of Hollywood back then, summed up in one picture, were: 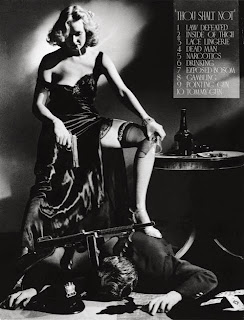 An artifact of this celluloid puritanism popped up last week, nicely raising the profile of Eva Green and Sin City: A Dame to Kill For in the process. In America at least, nipples are still considered Satan's cherries.

In contrast to the old man, all my heroes were outlaws. I grew up with '70s cinema and early '80s auteurs, the golden era of the film director. Years before the blockbuster killed the independent studios' diversity with superheroes and cloned plots, it was all Butch Cassidy and the Sundance Kid, Bugsy Malone, the Blondini gang from Goodbye Pork Pie, Bruno Lawrence, Sam Lowry in Brazil, Buckaroo Banzai, David Lynch, etc.

Moral ambiguity, anti-heroes, irony and pathos were main ingredients. Ultra-violence was used as allegory or hyperbole (A Clockwork Orange, The Evil Dead), as opposed to today's serious yet CGI carnage purely for the sake of it.

But I digress. The Mickey Rooney intersection came into mind on Thursday, as John Banks walked out of court a guilty man. My old man shared airtime with Banks on Radio Pacific. Of all the things Banks could have said as Michelle Boag quietly photobombed away in the background, Banks had to come out with an esoteric 1930's song about standing in puddles. A man so pole-axed, the child came out.

Three days later, John Banks announces he is exiting the political stage once more. Up until this afternoon, it looked like he was blithely looking at hanging around in Parliament, upstaging the election theatre cast from Jamie Whyte to John Key, before crashing through the footlights head first into the orchestra pit.

Farewell then, John Banks. You will be forgotten. Cannabis will be legalised. Look who's stupid then. Auckland will one day reverse your rates poll tax (aka the Uniform Annual General Charge), as well as your puritanical Brothel and Commercial Sex Premises bylaw. Charter schools will be folded back into the integrated schools system, where state accountability sits in judgement over religious schools.

Everything John Banks did will be dirt.