It seems it's that time of the Mormon calendar around here when those cycling Jesus Freaks turn up at the doorstep. Accordingly, I am now sufficiently motivated to perform a little experiment called Project Rude Awakening.

If writing No Junk Mail on the letterbox stops the mounds of consumerist crap cluttering my mail hole, would a No Jesus Freaks sign work too? 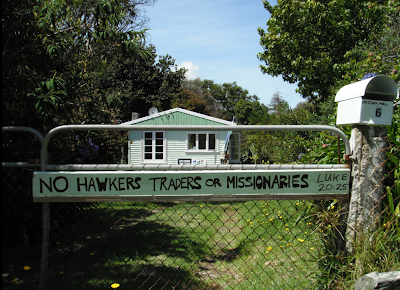 Let's call it a test of very limited sovereignty. I'll let you know how it goes, and whether it also works on Brethren, Buddhists, Krishnas and Scientologists too.
Posted by Will de Cleene at 13:45

Email ThisBlogThis!Share to TwitterShare to FacebookShare to Pinterest
Labels: godbothering

As a burned out hospo droid, I have a great deal of sympathy for artisan cheesemakers and other foody micro-producers with the new Food Bill before parliament. This yak on Nine to Noon's slot today has not eased my mind. The surreal ordeal of Biddy Fraser-Davies of Eketahuna, a hard cheese maker with a herd of three cows, has to be heard to be believed.

Email ThisBlogThis!Share to TwitterShare to FacebookShare to Pinterest
Labels: everything good is bad

Anyone who grows or eats food should have a listen to food activist Raj Patel's Feeding Ten Billion. It's about 45 minutes long and covers the myth of the Green Revolution, Mathus, Food Sovereignty, Feminism and the Malawi Food Crisis. Stay tuned til the end, where a question is answered with a Time Bandits reference.

Or you can read Patel's essay in Foreign Policy here.

And now, here's various post-WWII conflicts played out by national dishes of their combatants:

Email ThisBlogThis!Share to TwitterShare to FacebookShare to Pinterest
Labels: farce food, the greening

John Key today stood by the government's decision to declare a War on Clouds, after reports of a military exercise in Coatsville, outside of Auckland last Friday.

"Every Kiwi loves a summer in the sun. Clouds cause interference, blocking full access from the Sky," said Key. "Even a small cloud can block the full dominance of Sky. Therefore, it is in this country's best interests to remove any clouds."

The prime minister released details of the military exercise, which used a top secret piece of US equipment called a cloudbuster or Orgone Device.

"The USOD J. Edgar Hoover was kindly loaned to us by the United States government," said Key. "It is the same class of machine used to keep the sky above Hollywood free from clouds for years, and we are happy with its deployment here in New Zealand."

"Specially trained agents from Langley, Virginia were flown in to demonstrate the Orgone Device. These men were specially chosen for their highly repressed sexual energy, which is channelled through the J. Edgar Hoover and converted into Orgone. Clouds are eliminated without due process by the Orgone," explained Key.

When challenged by media on the bias of strict cloud regulation while Sky remains an unregulated monopoly, Key defended the government's stance by saying that you can't build a brighter future with clouds, but you can with a Sky portfolio.

This story was proudly brought to you by our sponsor:

Used without permission from DeepRed.
Posted by Will de Cleene at 19:23

This just in. File sharing website MegaUpload has been shut down by US law enforcement. A police raid in Auckland today arrested the site's founder and three others. The US probably going to seek extradition proceedings. In response, Anonymous is attacking the whitehouse.gov site, after taking out the DoJ, Universal Music Group, RIAA and Motion Picture Association of America.
Posted by Will de Cleene at 12:39

Email ThisBlogThis!Share to TwitterShare to FacebookShare to Pinterest
Labels: copyfight

This site would be blacked out in support of the anti-SOPA/PIPA, but the HTML hurts my head. So instead, I'm raping The Oatmeal's Intellectual Property below:

Please don't shut my blog (or Blogger) down because of my harmless IP cloning. Stop SOPA/PIPA. While you're at it, can you kill the IP trolls in the TPP too?
Posted by Will de Cleene at 22:35

Email ThisBlogThis!Share to TwitterShare to FacebookShare to Pinterest
Labels: copyfight

Edge.org has asked a whole lot of great wonks what their favourite most beautiful theory is. Some say DNA, some say string theory, and that's fair enough. I'm a supporter of string theory, if for no other reason than the solace in thinking that parallel universes exist where some of my personal relationships have had happy endings.

But the winner for me is Feynman Diagrams, indirectly mentioned by Timo Hannay:


I would like to propose not only a particular explanation, but also a particular exposition and exponent: Richard Feynman's lectures on quantum electrodynamics (QED) delivered at the University of Auckland in 1979. These are surely among the very best ever delivered in the history of science.

He's not wrong. The Douglas Robb Memorial Lecture with Feynman is one of the most important moments in NZ's scientific history, yet it passed by without so much as a blip at the time. Go on, have a taste of genius and beauty with one of the smartest guys of the 20th Century:

Just to nudge you, the clip above includes the best observation of the NZ character since Irish comedian Dave Allen desribed NZers as the most balanced people in the world, with chips on both shoulders.
Posted by Will de Cleene at 20:46

Email ThisBlogThis!Share to TwitterShare to FacebookShare to Pinterest
Labels: Beauty

You can tell a lot about a place by the way it treats its outcasts. It speaks volumes that Wellington has borne witness to some of NZ's most colourful homeless. Robert Jones, aka The Man with the Bucket, passed on some time ago. His images still adorn Chris Parkin's Museum Hotel, a testament to a particular age.

Blanket Man, aka Ben Hana, was a tragedy with a completely different spin. Today he stopped spinning. Every Wellington person worth their salt has a tale to tell about him, and I hope a statue of him is placed inconveniently as a traffic island in his memory; legs akimbo, some booze, and his can-pipe his faithful companions.

Email ThisBlogThis!Share to TwitterShare to FacebookShare to Pinterest
Labels: Wellington

The latest non-news is a study appearing in the Lancet journal pointing out NZ and Australia are the world's biggest consumers of cannabis.

I can't be arsed writing up a long post explaining that NZ's isolation, shift work culture and naturally uptight and repressed nature contributes to this reputation for the love of drugs. Instead, since a picture is worth a thousand words, here's 7000 words in 7 pictures. Click the images to embiggerate.

Here is a nice graphic showing the top eight consumers of particular drugs around the world:

A map of Drugs World with tranqs, trips, uppers and downers as compass points: 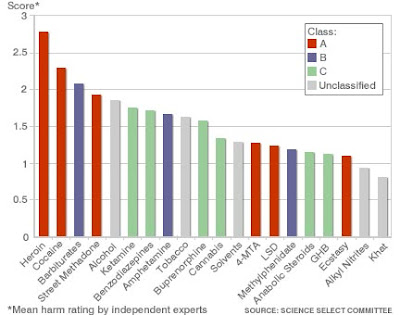 This one is fairly self-explanatory: 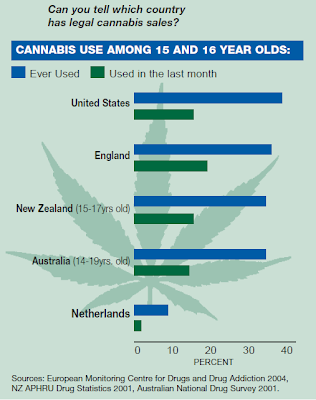 NORML's guide to cannabis laws in the US: 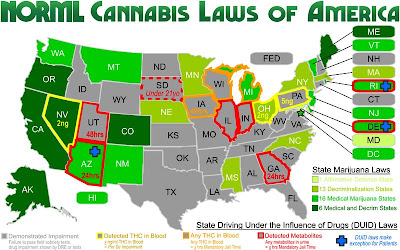 And finally, here's a break-down of cannabinoids and their particular medical uses: 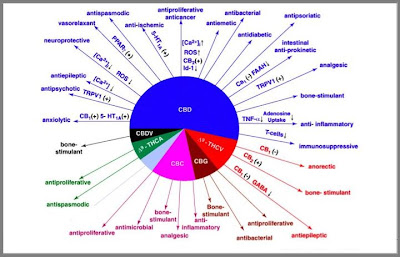 Email ThisBlogThis!Share to TwitterShare to FacebookShare to Pinterest
Labels: war on drugs

There's no news here as holiday season continues. To fill in what could be a long blank before any new news is forthcoming, here's some links.

# Rolling tobacco is now a tenth of the price of cannabis, as the goverment excise tax reaches stupid heights. Unless you're a frequent flyer. Duty free for the flying suits. Tax is only for the poor. Thank you very much Maori Party. Mad stats lapped up by baby journos get a holiday kicking from Eric Crampton at Offsetting Behaviour.

# MacDoctor has the completely reasonable idea to make injuring a person with a firearm whilst drunk an offence. Hey, we do it for drink drivers. Why should drunk killers get a free pass? Now if there's only something we could do about the golfers...

# Team eXiled has launched a Media Transparency Project to out pimped journos and advertorial editorials. What with all the partisan hacks in this country giving each other back rubs and media skills training, we could do with a bit of that here too.

# Matt Taibbi gets all existential over the US election whilst looking at the Iowa primary. Can't say I blame him. I've almost stopped reading Andrew Sullivan out of ennui over the 2012 circus.

# And what to make of the looming merger of the NZ Business Roundtable and the NZ Institute? ManBearPig anyone? Arts & Letters Daily to the rescue with a think tank link.

# A&L Daily also links to two reviews of Alex Rosenberg's atheist manifesto. The antidote to this book seems to be the 1933 classic, Bertrand Russell's The Scientific Outlook. Scientific determinism is a dead end.

Anyway, back to eating the organic plums from the backyard orchard. That's the really great thing about childhood obesity and helicopter parenting. The neighbourhood kids don't climb the fruit trees.
Posted by Will de Cleene at 22:22