Police and the sandals of self harm

There's a story in the HoS about police removing piercings from arrestees:


A woman is suing the police over allegations a female officer cut body piercings from her with a boltcutter after she had been arrested.

It's not the first example of police assault I've come across, nor is it the first time that the cops have justified their monopoly on force using the "It's for their own good" argument. I came across the human-rights-degradation-through-self-harm-minimisation-strategies first hand when I was arrested back in 2003.

Although I wasn't cuffed en route to Auckland Central police station, after I was processed I was told that I could not wear my Teva sandals in the police cell in case I hurt myself with them. 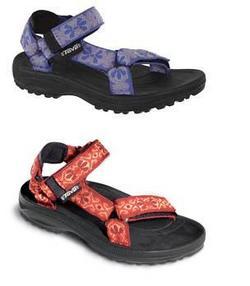 A quick Google for Teva sandal deaths points out the hollowness of this police nonsense. This piercing assault business goes to show that the police have not changed one bit. Effing truncheons for brains.
Posted by Will de Cleene at 12:52

Email ThisBlogThis!Share to TwitterShare to FacebookShare to Pinterest
Labels: Judge Dredd is a wuss

Selling NZ by the Pound

Pardon, dear readers, for the sporadic blogging over the last few weeks. There are many reasons why this has been so, but the main one is that I haven't been drinking. Sure, there's been the occasional beer here and there, catching up with old mates, but none of the long, contemplative solo drinking that fuels the really original content (moderated of course with chain-smoking rollies and puffing on the old pipe).

I haven't been drinking because I have moved out of the Hobbit Hole in Wellington and into the Daktory in Auckland. The Daktory is New Zealand's first cannabis clubrooms. Like Te Whiti and Tohu's little experiment in Parihaka before it was crushed by the armed constabulary back in the nineteenth century, the Daktory forbids alcohol. So here I am, perched at a mate's place's balcony overlooking Great North Road with all the basic blogging ingredients; a view, a bottle of red wine, a full stash box, and a pack of duty free tobacco. Let's go.

As long time readers will know, I have been hassling for some small time to reform NZ's stupid, archaic, disproportionate, hypocritical drug laws. I have reached the conclusion that hell will freeze over before our poll-driven, majoritarian politicians lift a finger to change these bad laws persecuting a vulnerable minority.

It is hard to pinpoint the exact straw that broke the camels' back; Operations Lime, Bitters, Cobra, the never-ending arrests of pot users and home growers. Or perhaps it was NZ Customs seizing all vaporisers imported into NZ not long after I gave evidence to the Health select committee demonstrating one: 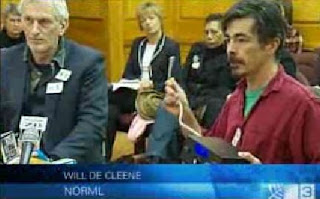 Vaporisers are one of the most effective harm minimisation tools for consuming cannabis. Because THC and other cannabinoids evaporate at a lower temperature to plant material, a vaporiser allows users to grab the medicine without the tar and burnt plant material entering their lungs. Absorbtion within the lungs is quicker than mouth sprays such as Sativex, and therefore dosage can be moderated much more accurately.

Vaporisers are to cannabis users what the Needle Exchange Program is to heroin users. Even rabid former drug czar Chairman Jim Anderton supported legislation in favour of the Needle Exchange. And Customs won't let these vaporisers in at all. Customs' reasons for doing so are wrong-headed and contradictory, but it is too expensive appealing to the courts when faced with the bureaucratic legal monolith of NZ Customs that makes dealing with ACC look like a box of chocolates.

It's all part of the rolling maul to allegedly eliminate drug use by removing utensils. There's a bill floating through parliament right now that will eliminate them even more by banning the sale of pipes, bongs, and parts thereof. Let them smoke joints and buckies, eh. That's some screwy version of harm minimisation right there.

Speak of the devil. Here's a TV3 puff piece on pipes at the dairy, complete with an interview with the empty shell known as Jim Anderton. Pipes help remove tar and other toxins from smoke on the way to the lungs. Pipes aren't as effective as vapes, but they're a crapload safer for users than an unfiltered joint.

That journo wouldn't know harm minimisation if it jabbed them with a dirty needle or a Hepatitis B joint. Fortunately for TV3, they manage to balance this rubbish out with this raw footage interview with the Police's Detective Senior Sergeant Chris Cahill, who seems both reasonable and clued up. I'd buy that cop a beer to bend his ear.

While vanilla politicians such as John Key, Judith Collins and Simon Power continue to arrest my people, invade their homes, steal their assets, and generally ruin thousands of lives every year whilst blowing hundreds of millions of taxpayer dollars on cops, choppers, courts, the clink and whatever other social costs of useless prohibition, I have had enough. It is time for some civil disobedience as well. 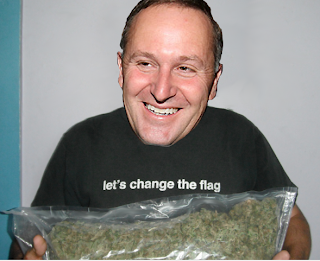 "John Key" holding a pound of cannabis
So here I am living at the Daktory in New Lynn, New Zealand's first cannabis club. The Daktory provides a friendly supervised environment for its members whilst funding cannabis law reform. Hey, it's not as if Lion Nathan or Vodafone will sponsor the cause. In the two years the Daktory has been operating, there has been no fights. It has maintained a self-regulating etiquette based on the internationally accepted AHOJ-G criteria (pdf):


The sale of cannabis is illegal, yet coffee shops are tolerated in their sale of cannabis, if they adhere to certain criteria: no advertising, no sale of hard drugs, not selling to persons under the age of 18, not causing public nuisance and not selling more than 5 grams per transaction.

I have never found a place in my life as supportive as the Daktory. It's the Whanau Ora of NZ cannabis culture. I am with my people. Time will tell if the cops bring the hammer down on us here at the Daktory, like they are already trying to do with Switched On Gardener and Operation Lime. Dakta Green is facing trial later this year for charges trumped up during a fortnight of police harassment back in 2009. I'm assisting in his defence.

Alas, I must go. I am not only blogging, but also babysitting. Daughter of Madame J is 10 years old. I have just told her that when I was her age, the police used to arrest gay people, raid gay bars and lock its patrons up in prison. Her jaw just dropped. It's amazing how intolerant this country once was, and still is. We hope for a change towards a more tolerant society, but in the meantime I'm living like it's legal. Wish me luck.
Posted by Will de Cleene at 22:25

Email ThisBlogThis!Share to TwitterShare to FacebookShare to Pinterest
Labels: gonzo, switched on gardener, war on drugs

Yes, there is no weather today: 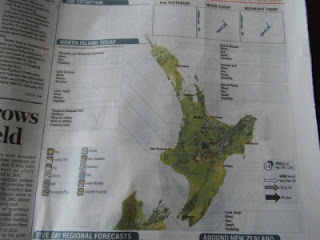 From the dead wood version of the NZ Herald. Oh hang on, there it is on the next page: 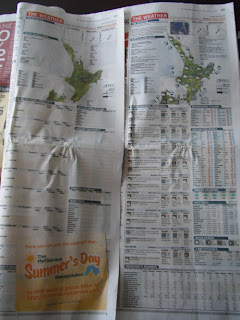 As Brisbane turns into a ghost town waiting for the waters to overwhelm the city stop banks, the whole deluge has brought back memories of an old film I accidentally went to when I was seven years old:

It took weeks for the vivid nightmares to recede, which is more than can be said for Queensland. It'll take years to clean that flood up. Best of luck, Aussies.
Posted by Will de Cleene at 08:46

Email ThisBlogThis!Share to TwitterShare to FacebookShare to Pinterest
Labels: Oz

Working with children and animals

Two stories from the Middle East Zeitgeist. From the Daily Dish:

And the BBC via Boing Boing:


Saudi Arabian officials have "detained" a vulture on accusations of being a spy for Israel, media reports say.

Speaking of the naive and the feral, one edition of Mark Twain's Huckleberry Finn has had the word "nigger" replaced with "slave". That's one editor who needed a thesaurus for Xmas. Slave is not a synonym for Nigger. The Telegraph points out that it isn't the first time Sam Clemens has been whitewashed by nervous revisionists:


In this Twain-targeting censorship, it was not the word “nigger” that was airbrushed from history, but a cigar. In recent years, Hal Holbrook’s Mark Twain Tonight! – a one-man show in which Holbrook dolls himself up to look like Twain and recites his classic texts – has become increasingly difficult to stage, even impossible in some American states. Why? Because Holbrook spends virtually the entire 90 minutes of the play chomping on a cigar, just as Twain did for most of his life, and these days smoking in public is considered even more morally depraved than uttering the N-word.

Take it away Stevie Colby:

My picks for Best of New Year's reading:

# Part eulogy, part allegory, Crampton points to a piece by Robin Maconie on Christchurch, NZ university politics and the passing of Denis Dutton.

# John Drinnan rounds up the media year with a scathing look at John Key's corporate welfare. Apart from the Hobbit swindle, there was the Fay dynasty picking up NZ on Air funding:


Taxpayers gave Annabel Fay's record company a $50,000 subsidy while her dad, Sir Michael, put up thousands of dollars to helicopter in commercial radio DJs and a public servant funding executive to their Great Mercury Island hideaway for a promotional gig.

Something is surely wrong when the Government attacks financially strapped public radio as wasteful, but gives subsidies for pop pap to people who can afford to pay their own way.

# Pablo at KiwiPolitico expands on Idiot Savant's discovery that many of the Urewera 18 will no longer be eligible for a jury trial. Justice delayed is bad enough, but changing the rules in between arrest and trial on this matter is contemptable.

# The DPB and beneficiaries might get Lindsay Mitchell annoyed, but behold her wrath of freedoms curtailed.

# Karl du Fresne takes a break from propping up the monarchy to write about the passing of Wellingtonian Duncan Barry McFarlane:


In any event, a big service was arranged in Newson’s honour and the Wellington underworld, having declared a temporary cessation of hostilities, turned out en masse. I covered the ceremony for the Evening Post , and what was very apparent that day was that a life of crime hadn’t been kind to most of those present. They looked prematurely old, were shabbily dressed and drove old dungers. But that couldn’t be said of McFarlane, who by all accounts lived very well. At the time, his address was a luxury yacht in the Chaffers Marina. No one seemed to know how he made his money but it’s fair to assume it wasn’t from designing Hallmark greeting cards.

# The Proceeds of Crimes Act, which allows the state to confiscate property willy-nilly, has taken a knock back in the courts. Fair go too. No need to punish the missus for the crimes of the husband when it comes to matrimonial property.
Posted by Will de Cleene at 12:34

Here is Part One of Charlie Brooker's Screenwipe look at 2010:

Nothing purges 2010 quite like New Year's Eve at Onetangi Beach on Waiheke Island: 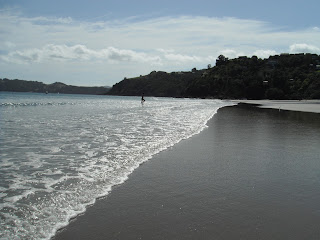 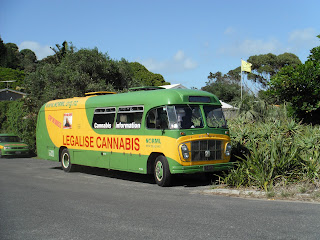 Getting in the face of people who can afford overpriced food in a recession: 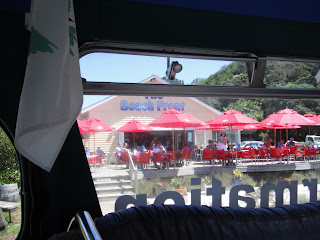 Although 99.9 percent of people didn't complain to police about our presence, some complaints were made on New Year's morning, and we were visited by the local police: 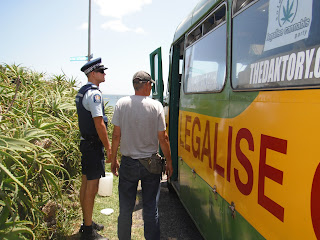 But they left without hassles. The Ostend Market people were friendly too: 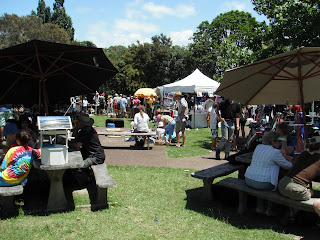 And a big thank you to the crew of Sealink who sailed us all there and back again: 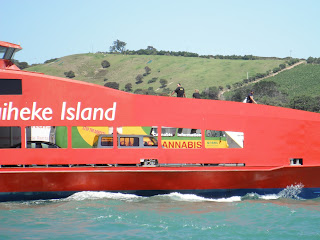