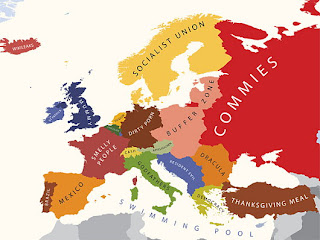 # Europe according to stereotype. Above map is how the Yanks see Europe. French, German and other perspectives here.

# BoingBoing points to some good lessons. Applicable not only to programming, but also to critical thinking in general. eg:


• Be suspicious of any technology that requires walls. If you can fix it, modify it or hack it yourself, that is a good sign.

# Bernard Hickey has recanted his neo-liberalism. I agree with some but not most of what Bernard's on about. I think it's good to keep an open mind on things. What is made abundantly clear is his genuine frustration at the way the game has been rigged. We agree on that much. I'll get around to blogging up a response some time later on.

# Open Labour is calling on votes in its first ever openly sourced policy platform. Vote for a range of policies, at this stage mainly focussed on opening up the state mechanism to the people. Registration required but otherwise plain sailing from there on.

# The Law Commission has released its discussion document on the Official Information Act Review. There are some major overlaps with the Open Labour aim of opening up official information by default. Am still wading through the 300+ page document. NRT is way ahead of me.

# And finally, here's the latest copy of NORML News available online. Includes a good overview of Operation Lime so far.
Posted by Will de Cleene at 19:19