All the interest (and swarm of party leaders' visits to come) for the Mana by-election has thrown up some remarkable contours of the coming vote. Unlike general elections, which are becoming less about the people and more about the presidential glamour surrounding the party leaders, by elections are all about the people.

Sean Plunket has wasted no time after being taken off the NatRad leash, colouring in his meanings of the local place names to us f/palangis in the Dom Post and a little ripper of a story at The Nation. Much detail is made of the wide disparities in livings standards within the electorate, straddling the gutter black to the gentry further up north, sitting in their no alarms and no surprises retirement villas.

There's some fuss made about the Labour selection process as well, which saw PR paratrooper Kris Faafoi pitted against local heroine Josie Pagani. David Farrar has rubbed salt into the broth. But it's the same as it ever was in the Labour Party. Just ask Chris Trotter about this old vote:


There was Ernie Hemmingson, Secretary for the Hotel Workers' Union. Not a very bright person to say the least of it. He was sitting down with a deck of 54 votes; card votes. I told the audience that in any other meeting of card players, he would be thrown out for having too many in the pack. Anderton moved that the Unions' vote be restricted and I seconded him. But of course the card vote manifested itself and the motion was lost.

Fair go to Goff though. Faafoi might seem an empty vessel, but he'll be a centre-left one. I fear Josie Pagani, who seems a good sort, would be too hard left for the parliamentary mix. The Labour caucus is still brimming with hard lefties, part Clark legacy, part fusion with Chairman Jim's Progressive Party. Labour needs to rebalance, and if that means the Mana LEC gets vote spammed, that's how it is.

But back to the people. Yeah, there are contrasts within the electorate. You've got to wonder how our electorate boundaries are worked out. There's communities of interest mixed with a representative slice of the spectrum. I think our election wonks do a pretty good job, all things considered.

NZ's electorates are a lot more balanced that the gerrymanderama in the USA. But that might not be for much longer. MoJo reports that some maths geeks have worked out the equation showing whether a district is gerrymandered or not; G = gP/A.

They've also designed their own vision of Texas electoral districts: 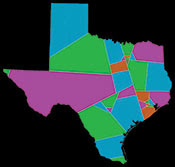 I don't think things would work quite that simple in NZ, but I'd be interested if anyone gave it a crack.
Posted by Will de Cleene at 13:57