God save the Queen, because the plebs won't 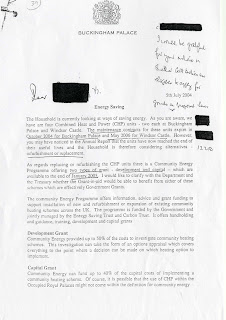 The Queen asked ministers for a poverty handout to help heat her palaces but was rebuffed because they feared it would be a public relations disaster, documents disclosed under the Freedom of Information Act reveal. Royal aides were told that the £60m worth of energy-saving grants were aimed at families on low incomes and if the money was given to Buckingham Palace instead of housing associations or hospitals it could lead to "adverse publicity" for the Queen and the Government.

Putting in the boot with the other foot, Gordon Campbell looks at the hopeful demise of the Commonwealth Games. Stephen Franks might pine for renaming them the Empire Games. The Empire's dead, Stephen. Even the Brits are seriously considering going Republic, making QEII the last Queen of England. That would  guarantee her the plinth.
Right about now, I'd recommend the UK royal family contact Simon Cowell about starring in a new reality show. It's a bit of spare change that would go to supplement the 38 million or so taxpayer quid a year handed over to the palatial household. Reality TV is the closest they'll get to royalties right now. I understand that Elton John gets a million quid for playing at birthdays. What kind of rent would Prince William get?
Posted by Will de Cleene at 17:50