The Sacred and the Pro Fane

I was hoping this David Fane thing might have died out by now, but no, the nation seems transfixed on this comedian's joke fail still. The clacking of knitting needles coming from Rachel Glucina's direction has legs. That's where it all started, wasn't it? 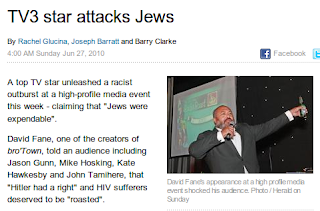 It certainly shows, given the polar opposite stories in the HoS and SST a week later. No-one seems to have been interviewed for the Herald on Sunday story. A blogger could have written it:


Just what other celebs in the audience thought that night is hard to ascertain. Mike Hosking, and Willy de Wit did not respond to phone messages or emails from the Herald on Sunday. Paul Ego declined to comment. Jason Gunn called back but did not respond to messages after that.

Jeremy Corbett emailed twice to say he was too busy filming 7 Days to respond and was then going on holiday. On the night, Corbett said about Fane's offensive outburst, "That's just Dave. He featured in an episode of Deal or No Deal once but it was so offensive it never aired."

In contrast, the Star Times went where comedians go, the Classic Comedy Club of Scotty Blanks. They talked to them, not the Harlot on Sunday. Another story, apart from the offensive comments, emerges.

The offence to which the jester is accused of took place at night at the Northern Club m'lud. It is a private establishment and no children were present at the time. Club policy I believe, yer honour. The alleged offence occurred in front of a paying audience, none of whom appeared to take any long lasting grudge because of Fane's comments.

The roast subject, which was omitted from the original HoS Story, was some suits. Not the Jews, not HIV people, not Hitler. It was the SUITS who were accused of being a bunch of Jews, nazis, HIV patients, which is fair enough. I've personally wished worse on some suits myself. Suits are fair game, m'lud.

A gossip columnist, probably with a complimentary entry ticket, one Rachel Glucina, thought the sour joke was memorable enough to be printed in the only metropolitan newspaper in the City of Sails, the NZ Herald. Note well! I doubt that the worldly Madam Glucina personally took offence, merely that she considered it newsworthy. She should stick to her knitting and leave the comedy reviews to people who give a damn.

La Porcette! J'accuse! It is Madam Glucina who should be in the stocks, not this fool! Attempted murder of a comedian! I'm sure that this femme fatale du porc won't be welcome in the comedy circles for a damned long time at the very least.

And as for the nasty, small-minded little sadists who yum up this lynch mob mousse and buy the faux-rage, shame on you too.
Posted by Will de Cleene at 19:44