Unleash the hounds of problem limitation

Recent foreshadowing by Transport Minister Steven Joyce and much pulpit thumping from the Law Commission suggests that drink driving is a big problem which hasn't been limited enough. Lowering the blood alcohol limit for drivers has been bandied about, and the Law Commission is explicit in favouring this in its Alcohol in Our Lives consultation. Thing is, is there really a problem? 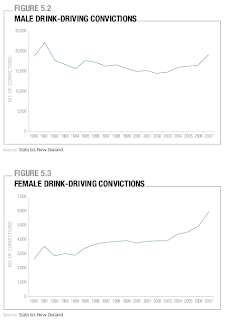 The Law Commission believes so, and has a couple of graphs to prove it. Both genders seem to be getting caught for drink-driving more often. The rate for women is rising quite sharply. QED, something must be done.

But wait a moment. Around 6000 chicks done for DIC, an all time high, is still less than a third of male convictions. All this seems to show is that female equality is trying to catch up with the male rate. As for the blokes, the rate is much lower than the pre-liberalisation days of 1989.

It's no big deal.

Why? Because drink-driving stats don't mean a thing. The only reason drink-driving is illegal is because it increases the likelihood of injury or death. It's the death and mayhem that's the essential problem, not how many breathalysers are processed. The stat that really means something is the road toll: 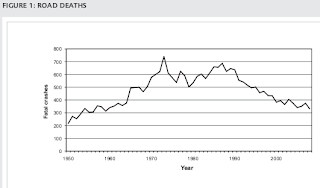 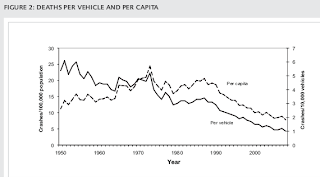 As far as road safety goes, NZ roads have never been safer. Considering that between 1998 and 2008, the NZ vehicle fleet rose from 1.8 million cars to 2.8 million cars, that's saying something.

If anything, it's fair enough to say that liquor reform and liberalisation had a positive effect on mature drinking habits, resulting in less carnage on the roads. It's not rude TV ads, lowering the alcohol limit or juking the media with high visibility checkpoints that changes people's habits. It's just leaving people to drink in peace and responsibility and letting time smooth the rough edges.
Posted by Will de Cleene at 13:53