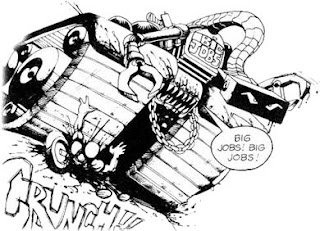 Crusher Collins has had her Boyracer law fly through parliament under urgency. Driving in circles will become illegal, outside of parliament at least. That'll keep those teens in line!

There's more than a scent of teen-bashing in the headlines of late. Hoity Toity Schools for Silly Twats have been the subject of middle-class tissue rending, with rugby match bashings and more recently, Twats with Swastikas. DPF is so outraged, he is calling this perverse history class criminals.

I don't believe that Jews have a monopoly on taking the piss out of Hitler. Otherwise we wouldn't have permission from the aggrieved to laugh at stuff like this:

Hitler, the Nazis, and all the rest of it belongs to everyone. That's history for you. Yes, even the teens are free to fumble with fascism. They might be rude and offensive but that's teenagers for you. While not quite so loutish as the twats, as a teenager I once made a short film for English class satirising a Young Hitler. You couldn't do that these days, I bet.

Besides, the Nazis have a lot to offer our corporatist work environment. Some of those teenagers will take an interest in the work of Joseph Goebbels who, along with Edward Bernays, were the fathers of sales and marketing. They will be tomorrow's admen and car salesmen.

Others might wonder at the brutal vision of Albert Speer and go into architecture or design. Policy wonks might be interested in following the detailed paper trail that allowed vast horrors to pass as blandly as a toilet roll requisition.

[...] a million bureaucrats are diligently plotting death and some of them even know it [...] Thomas Pynchon, Gravity's Rainbow


Maybe a few of those twats will end up in the armed forces, sacrificing free thought for unquestioning obedience. Who knows. But there's no crime in being a twat. They are all closed circles.
Posted by Will de Cleene at 18:46