A group of seriously wealthy businessmen and entrepreneurs are challenging their peers by signing a declaration asking for a wealth tax. Unfortunately, it's not the Tax Working Group or the Business Roundtable suggesting the idea, but a consortium of German rich pricks.


The group say they have more money than they need, and the extra revenue could fund economic and social programmes to aid Germany's economic recovery. Germany could raise 100bn euros (£91bn) if the richest people paid a 5% wealth tax for two years, they say.


The original story appeared in the Tagespiegel here, but the Goonglish translation has further detail:


Lehmkuhl, since he has this ability to read: on income distribution, taxes, capital gains. About the American Fair-Tax Network, a "social business", where profit maximization is banned as a corporate goal and determine the success of social goals. He dreams of a German equivalent of the American Organization UFA, "are United for a Fair Economy", where 700 "organized Responsible Rich... He has rearmed itself with numbers that prove that there has been in Germany a significant redistribution from bottom to top, and that it here to share surprisingly little.


So, how has NZ fared over the last thirty years? Here's the MED: 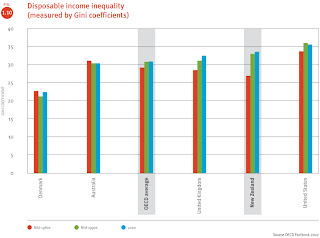 
The UNDP have released the latest figures, showing NZ as the 20th 6th least equal income share in the world, at 36.2 (Edit: thanks to BH's TTaT). Under Clark's Labour government, the gap between rich and poor grew faster than any time since Rogernomics. This is what the NZ Labour opposition must contemplate if they are ever to have a chance of regaining their support base.

The UNDP NZ report is a very interesting read too. All that high churn immi-emigration keeps NZ treading water.
Posted by Will de Cleene at 17:34