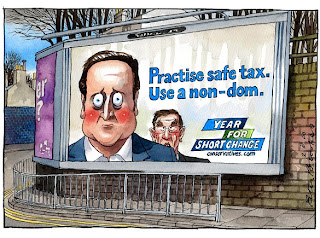 There's not a single, solitary MSM story in NZ about John Key's mate Lord Ashcroft, but the non-domiciled tax status of the National / Tory peer is causing a huge ruckus in the UK. Phil at Whoar mentions the story and that's it.

It seems that the former Mr Ashcroft received his peerage on the understanding that he would become a UK resident by the end of 2000. Here we are ten years down the track and he's still a non-dom don.

Not a good look for a man who has thrown millions of tax-avoiding pounds into campaigning in marginal constituencies for the Tories.
Posted by Will de Cleene at 09:11