The story so far. The Law Commission has released a discussion document reviewing the thirty-five year old Misuse of Drugs Act 1975, the first time such a review has occurred in a generation. The lines of communication are open until April 30th. Written submissions are being requested. Talklaw is your portal right into their public discussions.

If you ever wondered if there was time to change the dishonest, hypocritical, morally-skewed, racist, expensive, damaging laws on drugs, now is the time. The Law Commission received over 4000 submissions on their Alcohol in Our Lives discussion paper. We're aiming at getting at least double that for the MODA review. 400,000 kiwis used cannabis last year. Hey, I'm only asking for two percent of this large minority to lift pen to paper, or fingers to the keyboard and put a stop to this insane bullshit war on weed.

Cannabis is part of our culture. Let's be honest. We're soaking in it. No-one else in the world has tinny houses. Only kiwis spot from stoves: 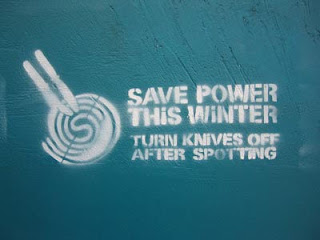 We can't go on like this; arresting people, ruining overseas travel opportunities, careers, lives and families by denying the blatantly obvious. Marijuana is now indigenous. Regulate it. Tax it. Get over it.

The Law Commission is kindly making themselves available to the public at meetings around the country during Drug Awareness Week. I hope the Young Nats, Young Labour, Young Greens and Act on Campus can once again unite as they did for the Keep It 18 campaign. If anyone from the Young Ones wants to come along for the ride, please get in contact with your local branch of NORML.

Many hands make light work of Power's swift dismissal of drug reform. Get in there, people.

UPDATE: If you're in Wellington at the Newtown Festival on Sunday morning, be sure to drop around to the NORML stand and say gudday.
Posted by Will de Cleene at 23:50