Fuck Julius Caesar. Caesar was a cunt. Lucius Cornelius Sulla, now there's a dictator. He knew his limits. Sulla set out to reform the Republic, not destroy it. But it's Caesar we tend to mythologise, and for some fairly good reasons. Caesar was a destroyer with creative vision. He knew how to make the most of his assets.

Caesar's ability to mobilise his troops was legendary stuff. If there was a goat track through the mountains that gave him a tactical advantage, he'd march it. Of course, more ground could be covered with less discomfort on custom-built passages. Caesar's army built roads.

Steven Joyce has announced the start of a four-lane expressway from Wellington airport to Levin. Transmission Gully is also a goer, which will allow the Mana Coast to become a real feeder node to Wellington. But I'm more interested by the big picture: 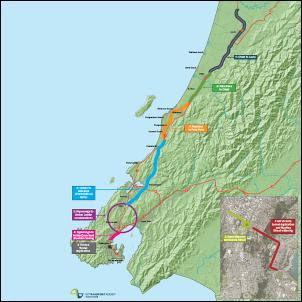 As long-time readers will know, I dream of a Cook Strait bridge. Quite a lot of my runtime has been spent on that puzzle. One of the easier parts to work out is how to get an expressway to Cape Terawhiti, the point where any bridge will inevitably launch from. It follows the valley that branches off Porirua and looks a bit like this green line: 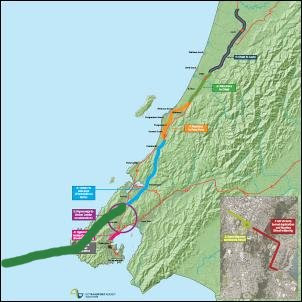 There's more to this thing than meets the eye.
Posted by Will de Cleene at 21:49