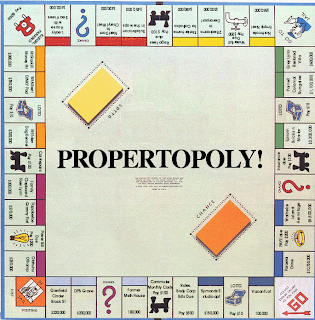 Bored with your Xmas presents already? Throwing punches at the relatives after days of petty mind games and old grudges? Why not keep you and the kids occupied with this game of Propertopoly! Although it looks like the traditional (and copyrighted) Monopoly board game, this completely different game has been inflation and reality adjusted to provide hours, if not years, of entertainment and education.

Like Monopoly, the aim of the game is to be the only one to own all the available property. Unlike Monopoly, Propertopoly! players may play Banker, Speculator or Sucker. Before the game starts, the Banker hands out $200 to each Sucker as starting kitty and $200,000 to each Speculator. Each time a player passes Go, the Banker pays them $200. The Speculators also start the game owning the top two thirds of the property, from the Mt Eden Dog Kennel to Paraetai Drive.

If a player lands on a square owned by another player, they must pay rent or housing costs to the owner, depending on what the player has built a house or apartment block there. All the transport and utilities have been privatised to multinationals, and there is no such thing as Free Parking. Speculators cannot be sent to jail and they can ignore all taxation penalties in the Chance cards as well as the PAYE square, where instead of paying $200 they get to roll again.

To assemble the Lotto pile, cut out 4 million cards and mark one of them the First Division prize. Mark another 16 cards as Division Two, 200 cards as Division Three, and so on. Shuffle the cards well and place in the square marked on the board.

Estimated game length can vary between 8 months and thirty years, depending on how long the Suckers can hold out before bankruptcy or suicide. For shorter games, the Banker and Speculator should openly conspire against the Suckers.

Propertopoly! is an excellent learning tool for young children, demonstrating the futility of trying to own a house. Enjoy!
Posted by Will de Cleene at 20:09