In the not too distant future, data might be stored in rainbows. In some ways, it already is. Turn a CD over and there's a rainbow, disproving generations of science teachers. The angle of incidence does not just equal the angle of reflection, but is more accurately the sum of all possible pathways.

Instead of trapping this rainbow on a plastic coated slice of silicon, try a glass convex mirror with some gold trimming. According to New Scientist, it can be done: 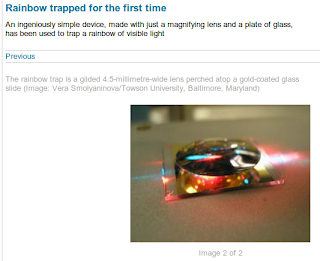 According to Gizmodo, this is a good thing for optical computing. I bet there'd be a lot less redundancy and error correction with rainbows. Data crystals and laser nets can't be too far away.

Luckily, I happen to have a laser pointer, convex lens and a mirror handy. So, I just had a go at replicating it. Unfortunately, I have no gold, it is a red pointer not a white light one, and it's a convex lens held up to a mirror, not all-in-one. But it did trap the red light somewhat.

If one can split white light right, then this could be big. Think of a heliograph that can transmit Megabytes more than Morse Code.
Posted by Will de Cleene at 14:39