The backlash on the sacking of Professor David Nutt from the head of the Advisory Council on the Misuse of Drugs is snowballing, with the government's chief science advisor coming out in support of the fired advisor. While the Labour government close ranks around their own, little do they realise how much damage they are inflicting on themselves. Even opposition leader David Cameron doesn't quite grasp the nature of things.


The row over Prof Nutt followed a series of public comments including a view that alcohol and tobacco is more harmful than cannabis, ecstasy and LSD.


What Professor Nutt was allegedly dismissed for is nothing new. This harm index was devised some time ago, and even Paula Bennett could work out from the graph below that indeed, according to the government's science select committee, alcohol and tobacco are more harmful than cannabis, ecstacy and LSD: 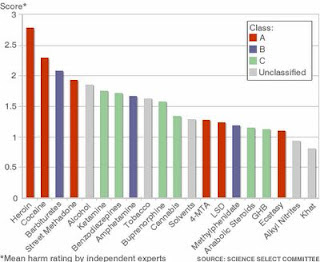 Sciblogs has a look at Nutt's sacking too. Here's Peter Griffin and Grant Jacobs.
Posted by Will de Cleene at 10:55