It's good to see Bill Ralston accepting things aren't all peachy keen in the financial world. It's almost reassuring to to read about the poor state of the property market, the talk of rising inflation. Oh, if only it were that simple. If one really wanted to see the truly awesome scope of what's at stake, have a read of this piece in the Independent about the derivatives WMD:

Not for nothing did US billionaire Warren Buffett call them the real 'weapons of mass destruction.' The market is worth more than $516 trillion, (£303 trillion), roughly 10 times the value of the entire world's output.

It's enough to make you wistful for a slight dip in house prices. At least that's fixable in the long run. At the very bottom of the cycle, you whack on a capital gains tax and say bye bye to property speculation. But if one of those derivatives should accidentally fall, they'll be no bloody bottles and no bloody wall. This tsunami could turn into a plague, a dystopia, or an asteroid.

Encouraged by my humble suggestion to the Federal Reserve on how to manage the bailout/rescue being followed, and as there's a mood for new ideas in the air, might I propose a very old idea. I don't think you're going to like it. For starters, this idea has one very large flaw. It's impossible. The idea is this: cancel all debts. Cut all losses and reset the meter. 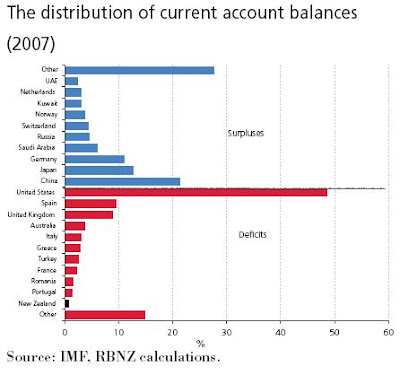 From this excellent Reserve Bank report

Above is just one example of how impossible cancelling all debts would be. Forget Third World debt. That's nothing. Have a look at that graph. The price the USA would have to pay for forgiveness of its current account alone, is one that the USA is not prepared to pay. You'd need some New World Order or something, and the USA would never submit to a supranational body it couldn't control. Which leads to another obvious reason that this is impossible. Getting all world leaders to agree to a solution is inconceivable. The Security Council can't even agree on anything, let alone the wider international community. Neither of the US presidential candidates have a clue what's happening. Have a look at Bill Maher interviewing former Comptroller General David Walker this weekend.

In NZ, Labour's announcement at the campaign opening of guaranteeing deposits was misguided. That's not a policy, it's a band aid. Leaving the bigger questions until a December economic statement, conveniently after the election, does nothing to inspire confidence. For those with a long enough memory, it might bring to mind the ill-fated December 17 flat tax package that Roger Douglas floated. Enhanced rail services between Palmy and Wellington might provide commuting bureaucrats with more options, but it won't fix the economy.

John Key isn't promising much better on this point. Quango hunts and red tape rationalisation only go so far. There's much talk of change but the How question is left unanswered. Vernon Small picked up this point with Bill English on Agenda, asking from where the mythical extra $2 billion worth of tax cuts that didn't quite make it were going to be purloined.

But I digress. Away from the international debt of nation states, how about all that private lending? We would certainly end up with a lot of pissed off Belgian dentists and Japanese housewives on our hands. But if world peace, security and co-operation can be bought at the price of a generation of Belgians putting up with bad teeth, is that so bad? Of course it is. This leads to another impossibility, the fact that foreknowledge of any such policy would cause the mother of all runs. You'd have every other man and his dog maxing out mortgages and credit cards like there was literally no tomorrow.

If the idea is impossible on so many fronts, why bother raising it? Firstly, there's the principle of precedent. It has been done before, and people survived. The Romans flirted with the idea, but only at a basely selfish level (I'm looking at you, Dolabella!). OK, neither are quite on the same scale as the current mess, but the Gordian knot remains the same. Significant constitutional reform went hand in glove with the economic one, so it's part of a package deal.

Secondly, to coin an Isaac Asimov saying, to ignore the plight of this financial situation is to say it's only their end of the boat leaking. If a butterfly's wings beating in an Amazonian rainforest affects a hurricane in Kansas, then the possible effects of the financial crisis will be indiscriminate in who it touches. Buddhist monks in the Himalayan foothills will notice it, even if it is an increase in their membership.

Thirdly, the recent meeting of G7 central bankers shows an unprecedented level of co-operation. The crisis has focused the concentration of a large number of great and powerful minds. Maybe there is hope of leadership after all. Lastly, I raise the matter to bring some perspective. If the craziest idea in the world is already out there, maybe some less crazy ideas get mentioned too. Maybe there's a less-hazardous way out of this abyss aside from jumping.
Posted by Will de Cleene at 16:00