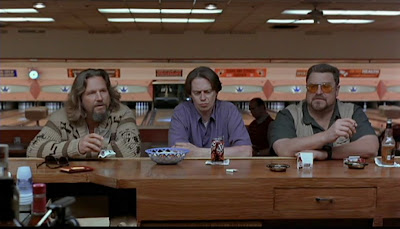 It's been ten years since the world was introduced to The Big Lebowski. The psychic shockwave abides to this day. There have been books (eg. I'm a Lebowski, You're a Lebowski), bowling leagues, and even its own convention, complete with Donnie, Dude and Jesus impersonators. The politics of neo-cons and Walter Sobchak have been compared, and there's even talk of a sequel:

“That’s just like a sick thought, isn’t it?” laughed Philip Seymour Hoffman recently, commenting on Turturro’s dream of making a sequel that revolves around his child-molesting, bowling ball-licking Jesus Quintana.

So raise a White Russian to the dude who really ties us all together. Happy birthday, Duderino.
Posted by Will de Cleene at 11:01