I've been getting some stick from Blair and others over my love-hate relationship with Act. So, by way of partial explanation, let me provide a reference point. Be prepared. This is going to take the scenic route. The short answer is that I am a moderate libertarian, and I have the Facebook application to prove it. But that's boring and transparent as mud. 42. How I got here was a sum over histories. The personal, the cultural, the physical, and the blood.

Let's start with blood. Dad's idea of babysitting was dragging me round to his mates' places. I sat there reading 2000AD comics while the old man talked to Joe Walding. 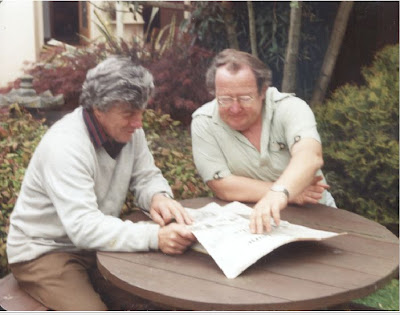 Joe made his money in the catering business. He's right up there with Alison Holst and Nana for my reasons for going into hospitality. Joe was also the bloke who introduced New Zealand to China. Joe was also David Lange's brain.

One time, Joe Walding and Dad were overseas on Foreign Affairs business. They were toasting shots in front of a huge open fire. After the glasses were drained, they tossed them into the flames, crystal tinkling. This was charged up on their expenses receipts, justified on the grounds that they were doing their bit to ease the strain on our then-pegged NZ currency.

Then there was Gordon Brown. No, think of someone completely different from the British PM. This Gordon Brown was quite short and had a brown balding pate circled with crisp white hair. Before Yoda, there was Gordon Brown of Palmerston North. This remarkably humble mentor of Dad's lived on Linton Street, near the corner with College Street. In his day, Gordon Brown was the chief executive of the Consumers' Co-operative Society, or the Co-op as it was known. The raison d'etre of this group was to translate a British ideal of socialist business practices into New Zealand.

Egalitarianism lay at the foundation of the co-op, the commonweal serving people not as employees but owners. It brought capital to those without it, but sharing a will to improve themselves. It was human capitalism. The Consumers' Co-op only lasted a lifetime, from 1935 to 1986. But other co-ops survived or evolved. Fonterra, up until the melamine stain, has thrived. It turned to kidney stones only when unco-operative overseas suppliers of core goods entered the equation. Out of mind, out of sight. Gotta keep that oversight.

But many smaller co-operatives were bought out or went bust in the face of the transglobal conglomerate of capital. Huge beasts, Foodstuffosaurus and Progressive Enterprises Rex, killed the local wildlife of butchers and market gardeners. Big Box Shops popped up, franchising became the norm. This was all good from a retail price perspective. The Friedman argument says that this means that consumers will have more money to spend on other things.

But the off-tag price was high. Scales of economy, and therefore profitability, tilted ever upwards towards the incumbents. New ideas suffered the insufferably constipated command chain of intra-company communication. Increasingly, decisions and processes were based offshore, NZ relegated to a profit-bearing backwater. As the co-ops tumbled, their power base within the Labour party fell too. Employees' proxies, the unions, took over, changing the Left's political arguments forever. But worse, much worse; freedom diminished.

Trev used to lecture me on the definition of freedom. "You're never truly free until two conditions are met. First, you're your own boss. Second, you don't owe anyone any money." For example, Bob Jones is free. He can tell people to piss off if he wants to.

But Trev was caught on the horns of a dilemma. On one horn, he reckoned that people could do whatever they liked, as long as they paid for the consequences of their actions. Trev supported the Homosexual Law Reform Bill not because he was gay, but because it brought legitimate freedom to an undeservedly persecuted minority. Before the reform, gays were treated a bit like how illicit drug users are treated now.

The other horn of the dilemma was Lee Kwan Yew and Singapore. The old man greatly admired Singapore's transformation from a tin shed to modern economy. This path of enlightened dictatorship provided a relativist example of how the common good was served at the the cost of individual liberty.

I used to have robust debates with Trev over this tradeoff. Unlike many of the traditional right-wing blogosphere, I see little connection between economic freedom and individual freedom. Just because Australia can dig up iron ore or uranium and ship it to China or the US at great profit, it doesn't follow that these nations should value individual liberty any higher than Nigeria or Sierra Leone. Diamonds did not bring individual freedom to South Africa. The citizens of Jedda and Dubai are not free.

Brian Nicolle informed me some time ago that when Trev drew up Act's first law and order policy back in the 90s, it was a "Hang 'em High" affair. This was no surprise, given the dinnerside conversations that used to fly around. One time, a judge and the old man solved the Treaty of Waitangi problem. Buy the Trentham racecourse, rig up a whole lot of nooses, and hang the bloody lot of them. So I really shouldn't be surprised with Act's current law and order policy. It's tame compared with what Trev had in mind. But that was him and this is me. That was then and this is now. I am my father's son. I am my own man.

Crime is irrevocably tied up with other other social issues. Employment levels is a main one. I'm no unionist, but I truly believe that no one goes to work every day in order to fulfil their job poorly. There's a sense of satisfaction and pride in a job well done, not only just the paycheck at the end of it. However, with low-skilled employment, there's a negligible barrier between turning up for work and doing the job well.

This is another benefit of the co-op structure. In such a scheme, even the lowest paid has an incentive to do well. Lacking that incentive and focus, underemployment as well as unemployment can lead to extra-curricular delinquency.

So the answer to rising crime is not locking more people up for longer. There will never be enough prisons. Just you watch when the recession really bites and unemployment goes up. As the cost of living rises, the squeeze on the impoverished low income earners will see an upswing in unlawful sustenance. As the frustration with the inability to pay the bills grows, so too will domestic violence.

Both main parties know the truth of this. Labour's and National's long term goals has always been aimed at maximum employment. Where the two main parties differed was how to achieve it. Labour thinks you can invent jobs, makework to prevent idleness. National knows that only productive work is ultimately sustainable.

To complicate this full employment picture further, technology and centralisation has had a crucial role to play. Just as call centres have made customer service desks obsolete, economies in the media business have seen sub-editing centralised, local papers culled. In the not too distant future, I can see a lot of retail jobs being superceded by RFID tags or electronic ordering systems. The nature of work is changing. In a world where unskilled labour is vastly oversupplied, it makes the digital divide look manageable in comparison.

So a simplistic solution of "three strikes out" or "zero tolerance" will make little impact when things get rough. Such a policy is a dead end, whichever party is touting it. While I used to favour the economic liberalism of Act, I cannot abide the short-sighted social conservatism of the party's law and order stance any longer. I'm out for the count.
Posted by Will de Cleene at 21:38