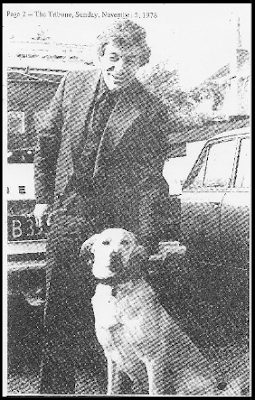 Back in the late 70's, Dad was on the lookout for another dog. Kaiser was still a sprightly gun dog but he lacked a companion to give him a bit of competition in the pointing department. Not that his pointing was going off the boil. It was only a few years earlier that he ranked at the Australasian Gun Dog champs. But Kaiser was a German short-haired pointer played by Alec Guinness. He lacked a Han Solo.

Kaiser was so civil and gentle that he would lead visitors around the house, guiding them by gently holding their hand in his mouth. Here's the fridge, where all the food comes from. Here's the possum skin rug I like to doze on. Here's the gun cabinet. Here's the door to the outdoors. Here's the boss' waka.

Cobber didn't work out, nor did Blue. Then two choices presented themselves at once; Starsky, a chocolate Labrador, or Hutch, the golden one. Both were Alsatian/Lab crosses. After a short trial with both, Dad kept Hutch.

Kaiser and Hutch worked well together. Hutch made Kaiser a bit more persistent in difficult terrain in flushing out the prey. Hutch, being of thicker hair and 90 percent muscle, jumped into water, forests and gorse bushes with equal abandon. Kaiser usually followed these paths of destruction placidly until Hutch had lost the scent.

Then Kaiser would step on in with the fine nose work, his history of smells sifted by wind direction and terrain. Inevitably, Kaiser would steer the scare so the rabbit/duck/deer/etc was flushed out towards the killing field. Hutch found his niche in the family pecking order, a friendly family guard dog.

To prove the point, we were at a friend's place in Tauranga one summer. The dogs were outside entertaining themselves, while we were in the lounge telling stories (the family did without a TV and weren't worse off for it). Dad was in the middle of one of his anecdotes, which required one of his piercing dog whistles.

There was this god almighty crash as Hutch appeared at Dad's side. We had forgotten that the ranch slider was closed, just as Hutch had ignored the quarter inch thick plate glass as he came to Dad's siren. Once he saw it was a false alarm, Hutch unbristled, unbloodied and scratchless.

Increasingly, it became clear that Hutch might have liked hunting, but he loved Dad. At least, his loyalty knew no bounds. I discovered this one afternoon as Dad was dozing in his offices. Hutch was minding the back door step. As I walked towards the step, Hutch let out this rumble from within. Reassuring him, I stopped at tried to pat him. He was having none of it. Incisors were bared.

I retreated to our house through the gate in search of dog biscuits. They failed to deter him from his post. I even threw a couple of sausages into the deal, but Hutch ignored these in favour of throaty growls in my direction. Oh well, it can wait.

My father's law partner, Tim Loughnan, wasn't so wary. Another of Dad's dozes locked Tim out of the office with Hutch on patrol. As Tim reached for the door, Hutch lunged for his arm. One bloodied retreat and nine stitches later, it was clear Hutch had to go. He ended up down at the vets with a lethal injection.

It wasn't the first dog that had got a taste for blood. Dad's very first German short haired pointer turned out to be a sheep worrier. That career was cut short the next day as the old man slit the dog's throat. Although only 4 at the time, I remember it clearly. We had lamb that night.
Posted by Will de Cleene at 11:55