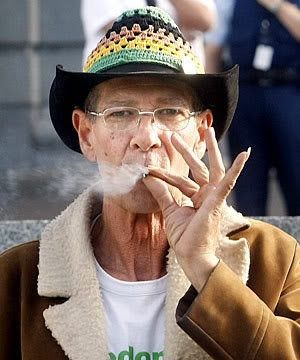 With all the major party fireworks going on in the Mt Albert by-election, I have overlooked the plight of Dakta Green in yesterday's 420 News edition. As ALCP's candidate for the seat, as well as knowing Dakta's reverence for the number 420 (a bit like the feeling mathematicians reserve for the set of prime numbers), Dakta Green gets his very own 420 News special.

I met Dakta Green a couple of years ago on a boat. I met him again last year, when he was touring the country on Mary Jane raising civil awareness through 42 towns in 42 days. He came across as an articulate, outspoken, dramatic, peaceful, passionate advocate for marijuana law reform. He does what I'm not brave enough to do.

The only real way to get this prohibition thing taken out of the political Too Hard basket is for civil disobedience. The scales of political economy brought to bear from enforcement costs on massed citizens, whether it's in a park, a coffee shop or a festival, neutralises most threats of force. Common practice trumps asinine law every time.

Dakta Green put that into practice, opening the Daktory out in West Auckland:


Back when the Dutch coffee shops first opened, there was no law change to support them. They just did it any way they could. And it worked. Dakta is trying to maintain a code of practice on the NZ prototype, like a real manager should:


The "Daktory" was set up in an old Auckland warehouse last November and quickly become a haunt for dope smokers and dealers. About 1500 people paid a $20 membership fee to join up. Organisers say police knew what was going on but never bothered them.

On the tour last year, Dakta organised a world record attempt at hot-boxing a bus, and turned up at John Key's Jobs Summit with a few ideas earlier this year. Jeez, what I'd give for $50 million to set up a coffee shop franchise. That would be a tourism spinner alright. Then Dakta Green turns up on the BBC radio with a very grumpy Ross Bell from the NZ Drug Foundation about a month ago. Straight after this, Dakta Green gets arrested three times in one week.

Note the police did NOT arrest everyone at the Daktory. No other arrests were made at J Day in Auckland, just Dakta. Idiot Savant at No Right Turn calls it disturbing. I'm hoping that this harassment is just one of Auckland's handful of fascist pigs doing a bit of over-enthusiastic foot stomping.

The cops have managed to avoid every other goddamned political shenanigan under the sun. Paintings, speeding tickets, overspending. And don't get me started on who almost caused a diplomatic incident in the States not so long ago. If I get so much as a whiff of political heavying on Dakta from on high, I will be most upset.