Self-inflicted gun shot to the head

What with Labour sitting in the poll doldrums and all, you'd think that Labour's strategists would realise that it would be a mortal mistake to introduce a really, really unpopular piece of legislation right now. What vote were they trying to court? Is there anybody who isn't pissed off with the Electoral Finance Bill?

I have been wading through the Electoral Finance Bill for some small time now. I'm about half way through. After a paragraph or two I have to put it down and make a cup of tea. I once read two pages at one time. I was almost overcome by the urge to fly up to Orkland put an axe in Helen Clark's electorate office door. Alas, it has been done before and it wasn't that effective the first time.

Where does one start? The loaded verbiage of 'third parties', as if NGOs are hoping to grab a seat on the Treasury benches? There's the first party, the second party and the third parties. Bollocks to that.

The idea that somehow the cops are going to go around busting Amnesty International for not filing an election return? Like fuck. The Chief Electoral Officer has a hard enough time getting returns from the political parties as it is. Can't find a link, but from memory the Libertarianz party was amongst a handful of parties who were late filing expense returns last election. As we saw last election, the police are justifiably averse to interfering in the political process. No-one was charged for a late return, or for that matter, spending more than the law permitted. More people to police is not going to encourage the cops to follow through.

I just checked my old LAWS 101 book to check that the police are officers of the Executive. If this bill is passed, Montesquieu would be spinning in his grave so fast, he'd be an infinite source of renewable energy.

Audrey Young has pointed out that with 158 clusterfucked clauses to work with, Bill English can bleed press statements on an almost hourly basis pointing out how bad this Bill is. I'd seen DPF's link to the Law Journal, but I didn't know that legal eagle Bernard Robertson had declared an 'any time, anywhere' duel 'with Labour on the matter until Audrey said so. Jeez, Labour sure know how to pick their enemies.

There is also the element that the Bill was deliberately poorly drafted, so a compromise on the essence would make us feel grateful for what freedoms were eventually authorised. This has not happened. There is a growing chorus to throw out the Bill in its entirety and start from scratch.

John Key has given an impressive speech laying out the scale of this flawed bill. It's been a while since I've seen such elegant speech-writing. It's all there, in words that anyone can grasp. If anyone videoed this speech, please put a link in comments. This is Winston's style; Churchill not Peters. It's that big.

The speech gives a calculated dig at the Greens' support for the Bill. Truly, this Bill is a poisoned chalice for the Greens. At the Electoral Symposium, Russel Norman sounded like the smartest guy in the room when he accurately detailed how the Canadian Citizens' Jury manifested support for proportional representation.

We covered this thing in Prof Elizabeth McLeay's post-grad course on the Democratic Audit last year. It wasn't the most efficient ways of garnering change, but it certainly was democratic. So I have some respect for Russel Norman, in that he knows what he is talking about. If you'd been at the Symposium you'd know what I mean. Every other political hack was talking out their fundament. Only Norman engaged. So it's fair to say that Russel Norman knows what is at stake by supporting the Electoral Finance Bill. Is this payback for the smacking bill? How feral is the hard left vote going to get? 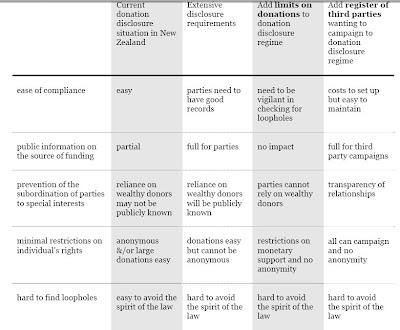 Clearly, the government was informed on the options. Clearly, they are aiming at the best of all possible worlds, where 'third parties' are goatse'd but political parties remained shrouded in vagarity.

When referring to the UK system of electoral campaigning, the Electoral Commission report does not mention the campaign time limits at all:

"UK parties do not receive any direct state funding for the election campaign. Each candidate is entitled to send an election pamphlet or letter to every voter in their electorate free of charge of postage. Each party is allocated time for ‘party political broadcasts’ on all TV channels simultaneously. The broadcast allocation reflects their size in parliament. Parties must report all donations in excess of £5,000 to the Electoral Commission on a quarterly basis, and on a weekly basis during elections. Third parties that wish to spend more than £10,000 in England, or £5,000 in each of Scotland, Wales or Northern Ireland supporting or opposing a party or group of candidates must register with the Electoral Commission as a recognised third party. There are limits on campaign expenditure by each candidate but not by the party."

John Key's speech was on to it, as he demonstrated how poorly Sellotaped together the Canadian and Westminster systems were:

"This cherry-picking of rules doesn't reflect the internal logic of either the Canadian or the UK system, and has resulted in a muddled and incoherent proposal."

I could go on, but it's been a very long day. There's more to come about what electoral reform should eventuate, why and how to get it.