Trans-Tasman has drawn attention to a pretty pickle:
"United Future is now UnitedFuture. It’s part of a “revitalisation” process ahead of next year’s election, says leader Peter Dunne. It’s got a new logo as well, looks like a purple cup with a blob of avocado in it."

Is it a smiling cyclops? Is it a squeezed boil? No, it's the perfect logo for Peter Dunne's party. It means whatever you want it to mean.

Meantime, Colin Espiner may be the the first journalist to use the words 'sober' and 'Winston' in a nice way. See for yourself.

It's good to see Guyon Espiner bright-eyed and bushy-tailed on Saturday morning's Agenda. He had a good smack at John Key the other week, and this morning's go at Pita Sharples got some good work done.

Mike Moreu's cartoons have been a joy to behold. It's a big bonus have him blogging about it all too. Blessed are the cartoonists. Bromhead said on Agenda a few weeks ago that if a politician bought his cartoon, he had failed as an artist. This is not true. Below is a selection of stuff the old man bought. 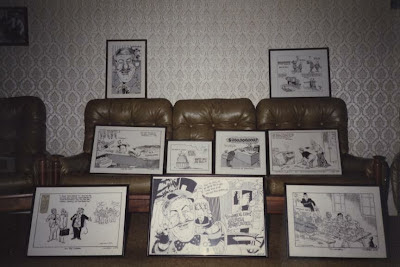 Unfortunately, the one cartoon I want to prove the point is not there. It might have been a Neville Lodge, and it depicted the old man in a Gestapo uniform leading old people into a gas chamber. Maybe politicians buy the art to keep them grounded. Having a fool on the wall helps. Perhaps it turns them into narcissists. Jim Anderton's got quite the collection in his office. Greater love hath no man, than to lay down his family for his life, eh Jim.
Posted by Will de Cleene at 10:12