Kim Hill interviewed Golden Bay resident Victoria Davis on Saturday. It follows the discharge without conviction sentence handed out to her the other week by Judge Zohrab on charges on cultivating and possession of cannabis. Of the 62 plants:


Twenty of the plants were seedlings and the other 42 plants ranged in size from 25cm to 1.2m. Eight grams of dried cannabis was found inside the house.

Congratulations to Victoria Davis and her husband for getting this expensive circus done and dusted. She had reluctantly joined a lengthening list of otherwise harmless old growers ending up in court for attempted gardening.

The South Island has had some high visibility Old Ones before the courts recently. 72 year-old Maurice Didham in Dunedin was accused of improbable amounts of future crop from a single lightbulb. Peter Davy was dobbed in by a do-gooding godbotherer for growing cannabis for his  partner with MS. The North Island fares no better. I'm not naming names any more though. The Waitakere Police are already using parts of my blog as evidence against the Daktory Four.

Lazy cops looking for easy convictions have ruined policing everywhere. The War on Drugs and the War on Cannabis in particular has done about as much damage to the police's reputation as its merger with the MoT under the Nats in the 1990's. For every photo op of dope on the table, there's the usual line up of dopes behind the table too.

The Law Commission's Controlling & Regulating Drugs Report points to the futility of the police's attempt at supply control. Using BERL figures, the Law Commissions cites in the 2005/06 year, police spent $116 million enforcing cannabis prohibition (Chapter 4.26). In the same year, 333,684 police hours were wasted on cannabis. In the latest Drug Survey, cannabis remains easy or very easy to get. Whether the prohibitionists like it or not, cannabis is a mature crop in NZ.

But my particular gripe today is correcting the many errors Kim Hill raised in her talk with Victoria Davis. It is difficult to separate Kim Hill's cheerfully belligerent interviewing manner from genuine ignorance, so here goes.

At three minutes, twenty seconds, Kim Hill mentions the "fairly clear link between cannabis and schizophrenia." Which can be a bit like blaming insulin injections for diabetes. David Nutt demonstrated the fallacy of this canard some time ago. Schizophrenia incidence is dropping, while cannabis use is increasing. That's called a negative correlation, in the parlance of our times: 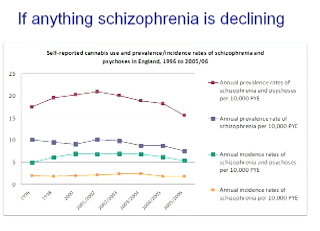 At 6:40, Victoria Davis mentions the economic argument, to which Kim Hill blows raspberries (figuratively). Davis cites the $39 million price tag of police prohibition. I'm not sure where that figure came from, but it is dwarfed by BERL's staggering $116 million on cannabis in 05/06. That numbers already six years old, so Dagg knows how much of this year's budget deficit is paying for this years round of yodelling drug cops.

Kim Hill whips out the "Wrong Message" dogma at 7:30. Here's the research to back up Victoria Davis' claim that US medpot states saw a decline in teen use: 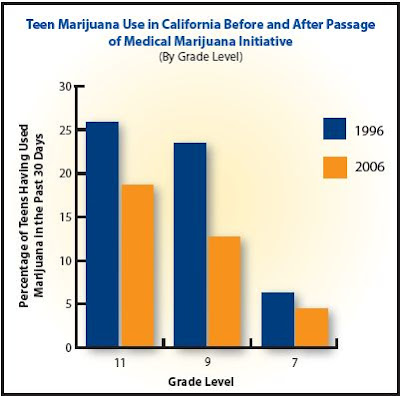 Then it's the What About the Kids? argument at 8:10. Demotivated kids and all, as if prohibition is a more effective restriction than regulation. This, from a culture which weans its kids on beer (literally if not regularly)? But hey, NORML can harp on about Responsible Use all we like, but to go into the specifics of harm minimisation, that's a crime. It's abstinence or bust for these zealous prohibitionists. So the kids learn it off the streets, same as it ever was.

Victoria strikes gold at 9:30 with "People shouldn't have to go to their lawyers for their medicine." You go, girl!

The next big topic arrives at 15:54, with the talk of drug research. As a former drug research correspondent for NORML News (RIP), Kim Hill's devil's advocacy annoyed the hell out of me. Show Me the Research! she could have said. Here's something I prepared earlier. Way earlier. It's a click-fest of research. Knock yourself out.

At least some people, dry right-thinking people like Karl du Fresne and Stephen Franks, are beginning to see reason. Their stance on The Panel earlier this week (the last few minutes yakking with Ross Bell) was the most honest I've ever witnessed from either of them. There might yet be an end to this civil war insanity.
Posted by Will de Cleene at 12:16