First we kill all the marketing people

I learnt much at the Purgatory of Dilbert temping at the Telecom call centre in Lower Hutt back in the day. The most relevant one for today's purposes is the levels of contempt by the coalface call centre grunts with the rest of the company. Management might have been incompetent, human resources were inhumane, but the lowest of the low worked in marketing.

Every day, the Outlook folder (Microsoft was compulsory) would fill with the latest byzantine marketing scam to memorise and foist on the luckless callers. Commercial sensitivity was such a worry that the phone pimps wouldn't release details of the latest round of marketing by confusion until the last moment before the ads hit the public. Occasionally the public were better informed of the promos than the call centre was.

With this experience gratefully behind me (I left two years before the call centre closed. Another poor career choice for a Half Deaf down the drain), it is 2 Degrees' marketing department I hold responsible for today's calamity, and not the poor bastards in their call centre.

Earlier in the month, the 2 Degrees sales sluts announced a special on 12 GB data packs for mobile broadband. No special terms or conditions, just one third off the price until July. 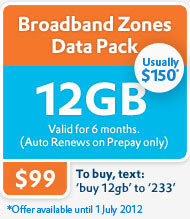 Woohoo, sez I. I should have smelled trouble when it proved impossible to purchase a $99 prepay credit. Billing systems and marketing departments exist in different universes, and this should have been a sign of something about to be annihilated.

This morning, my internet died. Apparently I had used three months worth of data in three weeks. No way, Jose. There was nothing else for it. I had to ring customer support.

If you think Deaf are loud in person, wait til you get an agitated one on the phone. Kudzai was at the receiving end of my complaint, poor bastard. He explained that because I had not texted to buy 12 GB (I had auto-renew set, so I didn't bother), the national data charges had kicked in (I had blocked this on my preferences) and blew the cap. I replied that there were no special terms and conditions saying as much attached to this promotion and that the Commerce Commission might have something to say about it.

Kudzai mentioned that someone would address the problem within 12 to 24 hours, and gave me a reference number. I'd be internetless until then. That's when I asked for the shift supervisor, in a voice they might have been louder than absolutely necessary. Libby sorted it out in the end, another call centre shift supervisor cleaning up after the morons in marketing.

So well done 2 Degrees customer service. It's the putting right that counts, eh. And let's hope that something slightly unpleasant happens to the brains behind that ill-executed marketing stunt.
Posted by Will de Cleene at 12:26