Back Benches was deserted last night. Wallace and Damian were stuck with safe MPs who were trusted by their respective whips enough not to say anything interesting and/or controversial, as well as a hollow audience to bounce off. The pub was empty because Parliament was a hive of activity right last night. Parliament rises in barely a month, and the Heineken Mastercard Rugby World Cup will provide a distraction for a flood of paperwork.

Mr Dunne said it is unlikely that all the Law Commission’s recommendations would find their way into Government policy or law.

“Officials are evaluating all the recommendations and will advise the next government on how best to incorporate some of the key into a new Act to be considered by the incoming Parliament,” he said.

Among the more controversial Law Commission recommendations in its May report was that clinical trials be conducted into the medical use of leaf cannabis.

“We are not going with that recommendation. It is the Government’s view that is not its role to initiate clinical trials on cannabis leaf or any other product or substance.

“If the active ingredient of cannabis is seen as essential or beneficial for pain relief there are already pharmaceutical forms of it available that provide measured doses and quality control,” he said.

Mr Dunne said that the Law Commission’s recommendations that specialist drug courts be established was being progressed separately by Justice Minister Simon Power.

Dunne is saying that it's not the government's job to base their conclusions upon evidence. The last patch-up job to the MoDA earlier this year (the Kronic ban, characterised by a complete absence of evidence) already gave Peter Dunne the power of Drug Czar. Dunne is able to ban substances with a wave of a Gazette and an order in Council motion. No need for EACD advice, select committee scrutiny or moral hazard. Dunne is judge, jury and censor.

It comes the same day that police around the country executed 300 search warrants, arresting 301 people, mainly for cannabis. No Right Turn sums it up: Madness. This must be about the fifteenth or sixteenth "cornerstone of the cannabis industry" the police have knocked off. How many cornerstones are there?

Meantime, a drug mule dies after trying to import half a kilo of cocaine into the country. Prohibition is literally killing people in this country. The lucrative profits that are bestowed on these drugs is solely because of their illegality. 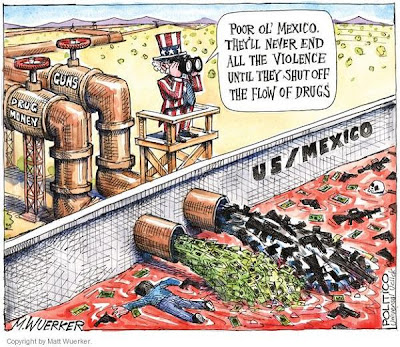 Massey University's annual Dope Fiend survey has been released by SHORE. The Herald notes that Ecstacy use is up and price is down. Not in the Herald story but in the survey, cannabis remains easy or very easy to procure. The price is stable at an inflation-resistant $20 a tinnie, $300 an ounce.