More thoughts on Switched On Gardener 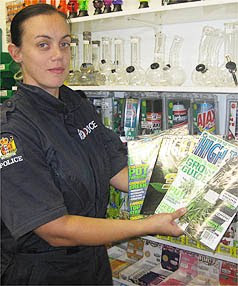 I gather much of the case will rest on their undercover spies, who established a relationship with the owner operators of the various stores. Switched on Gardener, unlike their backstabbing two-faced entrappers, has never pretended to be anything other than what it is. It has operated for nigh on a decade in much the same fashion.

It might be argued that the illusion of tolerance for all those years allowed the peaceful homegrow market to grow up. This massive raid was nothing more than a cynical harvesting of some obvious hippies. Good for the PR, MSM, stats and other Key Performance Indicators. This was the raid on Hamsterdam-lite, shooting at fish in a barrel.

As Bomber pointed out on yesterday's Panel on NatRad, the civil forfeiture regime was sold on getting tough on gangs. I don't know if the police can maintain the lie that Switched On Gardener were gang members. Not unless they want to claim nursery centres, Mr Green and Hire A Hubby are gangs too.

Another thing that bugs me is hearing about how the Judas conversations about growing tips are being used as evidence against SOG. They're clamping down on not only arty magazines, but talking science as well? I thought the Bill of Rights Act had some pretty concise protections on the freedoms of expression. Conversation is not illegal yet.

The chatter about police narcs being sold clones is also an interesting thing. The Law Commission has some very interesting things to say about social dealing. From page 194 of Controlling and Regulating Drugs:


10.21 Although scale should generally be treated simply as a sentencing matter, there is a class of supply that we consider should be carved out for separate treatment. This class of supply is “social supply”, where supply is of a very low level, among friends or acquaintances, without profit or with a very small profit, and with no significant element of commerciality.

You can't get high off a clone. Not in the immediate future, anyway. Clearly, if you wanted to nurture the thing to fruition, there's a big difference. If anything, the undercover traitors should be arresting themselves. And how much would you give a friend or acquaintance for a guaranteed girl plant of known parentage anyway? The SPCA charge a tonne for speyed kitties. What do you think a pedigree is worth?

Final thought for the moment; the jury nullification precedent set by the Waihopai hippies. There's a chance that juries will throw the charges out, finding the offences absurd and penalties disproportionate. If I was on the jury, I know I would.
Posted by Will de Cleene at 09:49