Hell is other Kiwis

Every now and then, there's a glimpse of self-centred NIMByism behind the facade of the easygoing Kiwi myth. Yesterday, there was the NZ Bus refusal to advertise the Atheist Bus campaign. The spokesperson for Atheist Bus NZ was on bFM today explaining that many other Western countries ran the campaign without incident. It's just our allegedly compassionate Christianist godbotherers in NZ who wish to stifle this innocuous debate.

Then there's the Wet House planned for Island Bay (maximum occupancy 10 people) that has been canned. That harm reduction idea was killed with the help of reactionary crap like this site: 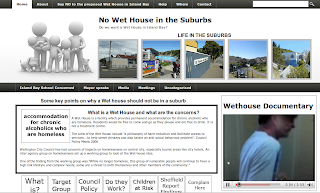 Children were at risk! One wet house resident in the UK killed three people! Watch the documentary of an obviously unwell man who might present some kind of threat!

The very latest round of NIMBYism has turned up in Hastings. While the Springhill Addiction Centre is undergoing refurbishment, an old rest home was going to be used as a temporary site for 20 people in recovery. This was too much for the NIMBYs of Mahora, who applied to the Environment Court (!) for a stay of proceedings. The Hawkes Bay DHB has given up, as Springhill would be opened before the court hearing had concluded.

It seems we only want to help those in need as long as our property prices remain unaffected.
Posted by Will de Cleene at 15:20