I think John Key just had a "Deep Dark Secret" moment. In Beltway-speak, I'm referring to former Labour president Mike Williams' overselling of Michael Cullen's bland budget talking up some deep dark secret that the Budget contained that would Make Everything Better. Of course, there was nothing of the sort. A few hay bales of straw were added to the camel's back. In Palmy, the DDS analogy might be translated as "Big Fucking Deal."

Yes, the speech was verbose. So verbose, John Key didn't even read the speech out in full at Parliament. Bah! Marathons are for Finance Ministers on Budget Day. I attempted to stick it through Wordle, but my OS and Java aren't speaking to each other for some reason, and I've got better things to do than puzzle it out. If anyone else has a go at parsing it, please let me know.

Anyway, Key makes clear where his antennae are tuned:


Only by lifting our country’s economic performance can we deliver New Zealanders the jobs, increased incomes and better living standards they aspire to and deserve.

Jobs, incomes, living standards. Luvvy-duvvy. Goff can say that with a straight face too. Further down, there's a reality iceberg. But no worries:


While unemployment is higher than any of us would wish it to be, it is encouraging that the loss of existing employment almost completely halted in the last quarter. But every person out of work is one too many. That is why the Government’s focus remains on the economy and on jobs.

OK, so it's economy first, then jobs, income and living standards, in that order. That explains the DOC estate dig, as well as the dig at Double Brown Bollard laying out the facts on Q&A the other day. Bollard sez:


I don't think we can catch up with Australia, Australia's a most unusual country, Australia has been blessed by God sprinkling minerals across the top of the surface in very easily accessible areas in places where it doesn't annoy people to mine them. China's there buying all that, it's not rocket science, they've run the economy well, but we just don't have those advantages, but that's all good news for New Zealand because there's a lot of crumbs come off the Australian table that we can take advantage of.

I'd blame comets, geology and joss before blaming God for us getting Pineapple Lumps, but that's just me. I realised not so long ago that NZ is also not Singapore and never will be. Wired has the GPS plots of last year's shipping lines. Long story short, yellow is the route of ultimate ticket clipping: 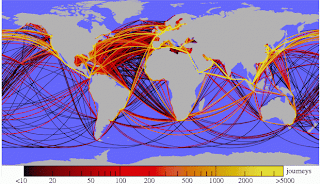 It's why Singapore has the biggest goddamned fleet of ghost ships in the world right now. NZ is a freaking backwater in a global recession. There's pluses and minuses to that. And John Key doesn't get it. In fairness, neither does Labour.


Back to the blab:


We are keeping a tight lid on new spending over the foreseeable future, which will enable us to get the budget back into surplus and keep public debt under control. Tight control of spending will also help to keep pressure off interest rates, which means lower mortgage costs for New Zealanders.

Overall, our economic policies are aimed at shifting the economy more towards exports and productive investment, and away from consumption and borrowing.

Key wants lower mortgage rates AND lower borrowing. OK. How does that work? Does that mean you'll be tilting the investment field closer to level? Actually, no. No CGT, land tax, or in fact any tax on the half trillion dollar property sector. Key might end up paying the US government more tax money for his apartment in Hawaii than he pays for his four or whatever properties in NZ (Owned by a family trust, actually. Including his own home. Trusts, PIE and top tax rates are not being levelled). Full shields to the property sector. Rest easy, Rick Barker!


The Government’s other priority this year is to make significant reforms in social sectors like the welfare system, education, the justice system, health and state housing.

OK, so the priorities are economy, jobs, income, living standards, the welfare system, education, the justice system, health and state housing. Bloody hell, you do have a full plate, mate!


None of this would have been possible without ACT, the Maori Party and United Future, and I want to acknowledge their ongoing collaboration and support.

Hat Tips to coalition partners, or Majority Gatekeepers as I call them. Who needs a bicameral parliamentary system when you can have minority parties at half the price and twice the convenience? On to tax:


The Government agrees with the Tax Working Group that New Zealand relies heavily on the taxes most harmful to growth, particularly corporate and personal income taxes; that there is a hole in the tax base around the taxation of property; that the tax system lacks integrity and fairness because of differences in the treatment of entities; and that there are significant risks to the sustainability of the tax revenue base.

But Key intends to do absolutely nothing about it. I can understand Key telling the 2025 Taskforce to get fucked, but the Tax Working Group gave wider options than them and all that Key hints at here is tinkering. John Key the Tinkerbell?

National have quite clearly missing the Education bus, what with Business NZ's Phil O'Reilly bitching about the lack of training options on Nat Rad last week. The Poly-Wolys are closed shops, the unis have limited restrictions, it's all a big fat nothing.

Holy Fred Dagg, I'm not a quarter way through Key's speech and I'm bored. Here's Kiwiblog with the guts of the rest of it. Bernard Hickey here. David Slack is veritably scathing here. TVHE here, etc.

Just one more thing about the raising of GST to 15 percent. Key's dreaming but that's the expendable one. The price is not right. All in all, it's an opportunity wasted.