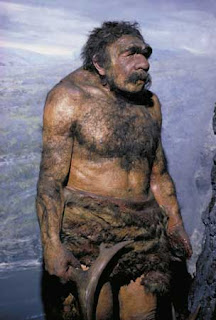 You think you know what Neanderthals looked like right? Not quite like this one to the left, who looks more like an Italian friend of mine, but you get the picture. Same sorta hominid as us. Even the BBC docos play it thusly.

Good news everyone! An Australian scholar has teamed up with a Madrid digital sculptor and they have come up with an updated rendering based on skulls and... 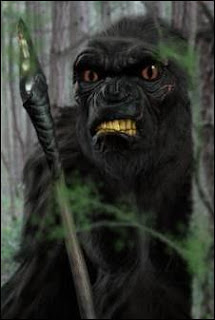 Vendramini’s forthcoming book Them and Us: how Neanderthal predation created modern humans, describes how the human population of the Mediterranean Levant—the population from which every human on earth is descended—was almost wiped out by Neanderthal predation, until there were only 50 human individuals left in the region. He illustrates how those 50 survivors salvaged humankind from annihilation by transforming into aggressive and predatory beings that fought back—spreading across the globe, killing (and sometimes eating) all Neanderthals in their path, as well as ‘Neanderthal-looking’ hominids, until Neanderthals themselves became extinct.
Posted by Will de Cleene at 18:47