I've been really enjoying the post and subsequent comments over at Open Parachute on Carl Sagan's challenge. Speaking of the cosmological argument, news just in from Hubble. God has a message for Sarah Palin. That's right, it's a fifty-five million light year long arm extending a fist with a middle digit: 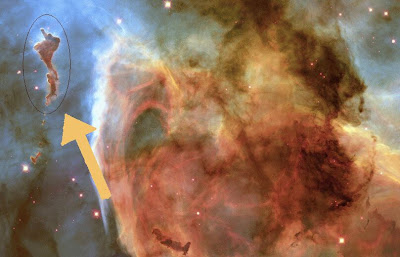 Scientists have named it the Bird Nebula (because as all scientists know, to name it is to understand it. Ask a Weather God.) By the looks of it, God is left handed or at least ambidextrous.
Posted by Will de Cleene at 01:14