NatRad talked to new NZ Initiative head honcho Dr Oliver Hartwich today, demonstrating where the think tank sits on the ManBearPig spectrum after the merger of the NZ Institute and Roger Kerr's NZBR. Suffice it to say it's at the neo-liberal end of the beast.

However, I do agree with Hartwich's proposition that the Nixon Shock of 1971 was the thing that rooted the present the most. Flash-trading algorithms, derivatives, naked short selling, the 2008 GFC; all of it can be laid at Richard Nixon's doorstep. One of my pet peeves with the Left is how they use Rogernomics as their whipping boy (Here's Laila Harre at it last week). When it was actually our own Little Nixon, Rob Muldoon's debt-fuelled response to the Nixon Shock that irrevocably bankrupted the country.

That's OK. I get my payback where I can. Take, for example, the social experiment I played on my Facebook circle last week, posting up a picture of my father with Milton Friedman: 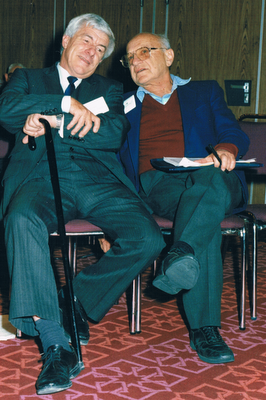 Oh, I do love a good shit stir with my spectrum of friends.

Retiring Price WaterHouseCoopers Wonk and Working Group member John Shewan has the proof of it all in his Budget recap, which includes a useful gallop through the last 34 years' worth of Budgets. Witness Muldoon's fuckery with the economy: 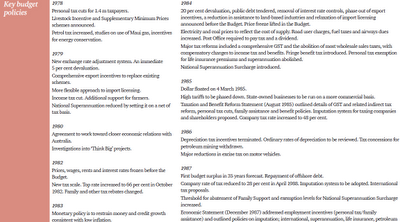 Even visiting Nobel Prize Winner Richard Feynman picked up the scent with this immortal observation in 1979 (seen here from 5:15 to 5:30): 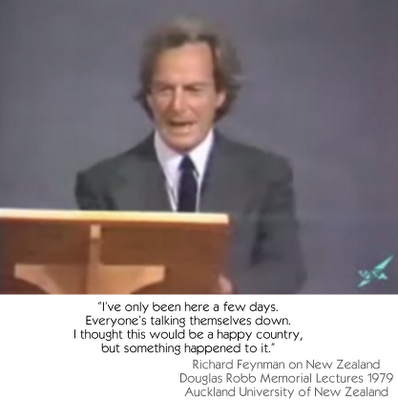 Don't worry, Europe and US. With your mismanagement of your economies, you'll be as destitute as us in no time. Dagg knows what their Rogernomics correction will look like, but it will be nowhere as pretty I bet.
Posted by Will de Cleene at 20:01