Unlike David Farrar, I am unimpressed with the HoS story on the family with 17 children. I'd have 6,217 kids by now if I hadn't used some kind of contraception, so 17 ain't no thing. I'd also be living in Thailand whilst the NZ state paid out the DPBs, eh.

As a kid in Palmy, we lived next door to this Catholic family, the O'Connors. Nice family and huge too. I was mates with the youngest, him something south of ten years old. The eldest sibling was thirty-something with a vast record collection. Lots of kids in between too. They all lived under one roof, in a house only slightly larger than our own.

Although the O'Connor's hadn't yet reached 17 at that time, the old Mum might have still had it in her. So, no grudge against the Brunton family for the size of their clan. No, it was their Old Testament names that DPF quoted that set off my Fundy-ometer. Then the mention of home schooling triggered the electric neon crucifix alarm. A look at the photo confirmed their identity. 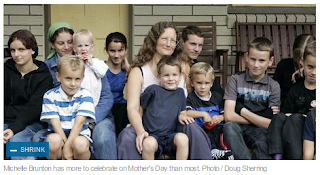 Boys to the front, little sign of the daughters. I presume only two girls dressed in the blue sacks at the back, although it appears from the story there's about a 50:50 split of sexes in the clan. The mother's role in life is much the same as that extolled by that fascist patrician Adolf Hitler. Women are for breeding purposes only.

The HoS covers this angle to this sect in a secular society:


A copy of an employment agreement obtained by this newspaper lists some remarkable requirements: teachers must disclose their "personal circumstances", forgo union membership and agree that evolution is a falsehood.

The equal opportunity to education that is every New Zealander's birthright is being eroded. Religious schools with state funding, among which the Exclusive Brethren are a more extreme example, must not get away with crippling their children's education to fit their narrow world view. Telling the women they are not good enough for university is female circumcision of their intellect. Temporary New Zealander Katherine Mansfield was onto it when she yearned to be all that she was capable of.

The government cannot continue funding fundamentalist ignorance of this ilk if it wants a true R&D base in NZ. If you have to piss off a few fringe elements, so be it. We need gronks not neo-Amish. We don't lobotomise our kids with creationism at our state schools.