The rapport between Mikey Havoc and John Key on bFM today resulted in an apt name to sum up the furore over the 92A story thus far. Judas Tizard. 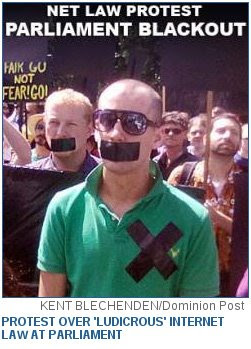 I did my bit. Armed with a Fair Go sign that possibly breached copyright, I stood with what another person described as a Who's Who. I guessed around 200 people turned up to protest. This was no Rent a Crowd. You couldn't afford to rent this crowd; politely pissed off ISP providers, bloggers, deep thinkers, sys admins, programmers, artists and other creators, students and political junkies from across the spectrum.

Peter Dunne, always one who knows which way the wind is blowing, came down to accept the petition from Creative Freedom Foundation director Bronwyn Holloway-Smith. Dunne compared 92A to the Electoral Finance Act, and he was spot on.

Just as Mark Burton's ham-fisted and poorly drafted Electoral Finance Act helped savage Labour in the election, Judith Tizard will be remembered for brutalising Labour's support due to 92A. Clare Curran pretty much confirmed this idea not long afterwards, when she also addressed the protestors.

Like the Electoral Finance Act, Labour are keen to cut loose of their past mistakes. The previous Labour leadership had pursued victory at any cost. With the EFA, it was to shut down dissent. In the case of 92A, it was to clinch an American Free Trade Agreement to wave under the noses of the middle voter. Labour lost and the purge is on. They need to lose a lot more baggage than Burton and Tizard, but it's a start.

So, repeal or postponement would have the support of Labour, the Greens and United Future, at the very least. As Met Turei says, it's all rather academic because it's really up to John Key's cabinet, with guidance from Ministers Simon Power and Steven Joyce:

The Greens did not deny leave, why would we as the bill wont make the situation any worse? But it certainly wouldn’t make any difference to the problem – that is that if Cabinet doesn’t agree on Monday to issue an order in council to prevent section 92A from coming into force, then as of 28 February ISP will have to comply with the provision.

Everything comes down to Monday. Get an email off to the relevant Ministers. Contact details for them here (.pdf). Do your bit!
Posted by Will de Cleene at 15:50