Privacy International has released its "Leading surveillance societies in the EU and the World 2007" report: 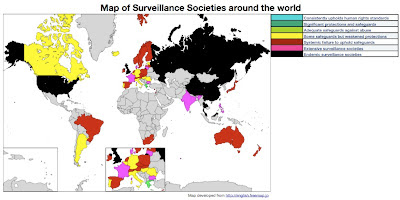 New Zealand has "systemic failure to uphold safeguards". Our score was equivalent to the EU average, 2.3. This well behind Germany (2.8 and decaying) and Canada (2.9). While New Zealanders may work the same long hours as the Greeks, we don't share their effort in keeping the tentacles of state out of our affairs. They top the charts with 3.1.

"Officers watched them shop, listened to them talk as they drove to what is alleged were guerrilla training camps, and copied their text messages as they arranged their meetings...

During their investigations, police used sophisticated mobile phone eavesdropping technology and trained covert cameras on suspects' homes, a remote bush path and at vehicle tracks and camp training grounds. They traced new suspects and gained information via computer sites, phone, bank and power records, Trade Me user profiles, passports and birth certificates, as well as from an informant."

In fairness, the Law Commission has released a report slamming the state of state search and surveillance. I've seen it but not read it. The phonebook-sized volumes are more than a little daunting. The headlines have pointed out that the current state of affairs is not good. What would be more constructive is if someone with a mind for such matters can wade through the thing in its entirety and translate it. Where are they aiming this thing?

New Zealand is some way away from the black security blankets of the US, UK and China, but we are not as free as we think. In spite of best intentions, nanny states tend to get kinky.
Posted by Will de Cleene at 09:35