Sue Bradford is rightly pissed off that the public's news segment is reduced to penguin soap opera (It's a boy!) and the "Kiwi, kiwi, kiwi! Oi! Oi! Oi!" upselling of the Heineken Mastercard Rugby World Cup. Frankly, there are more important matters that need urgent attention.

Forget the penguin, forget the rugby. Forget, even, the Springbok Tour for a moment. Forget the whatever umpteenth million being borrowed by the gummint on the fiscal deficit, because all these things are fulcrumed by the will of the people. The popular vote is the only true leverage the public has against the government. The erosion of this collective power is called the Democratic Deficit. What is at stake is all our futures.

The opiated albatross of a gullible public reduced to Reality TV manipulation of their senses and sensibilities is a tragic thing to behold. Let them eat Sky TV, the punters will be entertained and compliant. Civic engagement requires time and energy for investigation and consideration. We've all had a hard day at work though, and right now we all just need to vege out.

Danyl at the Dim Post has demonstrated the erosion of public empowerment very nicely: 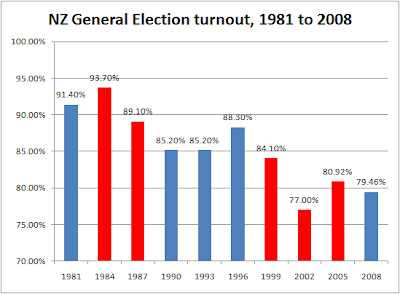 Lacking a source on his post, I fact-checked the graph and it's spot on to the figures.

The Electoral Commission has offered funding to investigate this sad phenomenon, urgently in the case of Youth and Maori lack of interest. Bryce Edwards is hoping to have a crack at this nutty issue tomorrow night in Wellington at my old workplace, the THC James Cook Hotel. Auckland gets a pew too. Check the link for details.

For my own part, I studied the Democratic Deficit as part of Prof Elizabeth McLeay's Honours course (Prior to my last serious mental breakdown of course, the Great Knowledge Brings Fear Collapse of '06). What did I learn for my troubles?

NZ has had a high vote participation rate up until the 1970's mainly due to the organisational strengths of Labour and National.

Unions were compulsory at the time and one of the advantages for Labour was that they had a readymade database of their electorate with which to turn out the vote. Pubs and Workingmen's Clubs, the men's dens of the working classes, proved apt marketplaces for political discourse. The pubs have since been de-sexed and made fit for high-chairs and baby strollers. The coarse and foul world of politics has no place in such family oriented climates and died out accordingly.

The only places with masses of people these days are the zombie churches of the malls, or the ferocious hunter-gathering in the supermarkets. These privately owned public spaces are dead air for political discussions, by order of management. Naomi Klein mourned this loss in No Logo.

As for National, the farmers had their federation, there was and still is the Rotary Clubs, the Freemasons, and the usual conservative networks such as the Catholic or Exclusive Brethren sects (The Anglicans tended to lean Labour, but not always). The doctors and lawyers have their unions as well, tarted up as guilds or associations more than as some kind of civic voting bloc.

But fewer potential National people are joining professional associations such as Rotary. Others have stopped believing in God, or at least are principled enough not to attend church gatherings purely for the lucrative networking pool and power it can bestow. And who in the hell wants to be a farmer who isn't one already? The Big Boys, that's who.

The disintegration of structured communities isn't the half of it. I've said it before but it's worth repeating:


Let's go back to 1984. New Zealand's closest relative to Robert Mugabe has just lost the snap election after successfully hiding the true scale of his totalitarian mismanagement of the economy. The incoming Labour administration has opened the books and gone omfg this is worse than than anyone ever imagined. It was as if they had been given a billion maxed-out credit cards and could barely afford the minimum payments. The debt collectors were very close to being called in.

Roger Douglas' economic revolution was a direct consequence of Muldoon's lack of fiscal transparency. State assets were not sold just for the hell of it. The country was so deep in the shit, the only hope lay in selling the silver to save the country from slipping from Second World to Third World. Restructuring by the Fourth Labour Government ensured New Zealand's place in the First World.

Fast forward to 1990. The Fourth Labour Government is going through loud and painful death rattles. With leadership changes happening with alarming regularity, the last thing it needs to advertise coming into an election is a massive fiscal blowout. Lo and behold, the Nats storm to victory in a landslide. Ruth Richardson opens the books and goes omfg this is worse than anyone imagined. It was as if a bank had given out credit cards to a billion monkeys and dropped them outside the Bananas-R-Us megamall.

Ruth Richardson's Mother of All Budgets was a direct consequence of Labour IV's lack of fiscal transparency. Welfare was cut back not out of any specific hatred of beneficiaries, but an urgent need to cut spending and trimming the less productive government programs where possible. Selling assets wasn't really an option as there wasn't much left of value that hadn't already been knocked off in the pawn shop.

By now, the General Electorate was thoroughly pissed off with politicians. Election manifestos were rightly viewed with cynicism and distrust as a history of broken promises piled up at the door of both main parties. The citizens vented their spleen by favouring a new system of representation, anything that would stop this violent lurching about from rattling the crockery.

In some respects, 1996 and the first MMP election was our twilight's last gleaming moment. Sick of politicians breaking promises on a regular basis, the electorate had hoped they had finally put a bridle on the bolting horse of majority rule.

The upcoming electoral referendum carries the fate of that choice. Even with Vote for Change's public self-mutilation, the MMP referendum that will probably entrench the existing system (with a tweak of MMP's nipples, comme toujours) also risks a possible challenger which would further damage the democratic process (I'm looking at you, SM. You're just FPP with a latex fetish).

Yes, politicians still lie, but the lies are of a smaller stature than the plague of whoppers we've had in the past. Yes, MMP still has its drawbacks, but on the whole it is a good balance between fairness and simplicity in a voting system. MMP has proven more transparent when politicians try for the Unbridled Power gambit these days. Just look at the disapproval the Nats have got for their abuse of urgency.

But that still doesn't address the issue of the Democratic Deficit, merely shown that the public has less reason to distrust politicians than usual. They're still staying away in droves. Maybe Winston Peters' dance of the seven veiled weeks of kingmaking after the 1996 election caused a public loss of faith in the new system by 1999, leading to voter turnout slightly lower than the apathetic 1990 and 1993 elections.

The once in a century low turnout in 2002 was probably a whole bunch of depressed National party supporters sitting out the election next to the depressed non-voting Labour supporters. Participation flinched upwards briefly as 2005 saw both main parties perform Herculean turnout drives of their respective votes. I fear the tide will recede again at this year's election.