I was bemused to flip through the Weekend Herald this morning to see no trace of the protest held outside the Auckland District Court yesterday morning. Although the courts are diagonally opposite the NZ Herald head offices, and despite the protest lasting an hour and a half, not a shred of its passing reached the greater Auckland tabloid readership.

If one of them had enquired, they might have been told how one of our own was facing charges that morning. He had been trading Nixons for Queens and had been held up at knifepoint and robbed. He chased the thief while calling the cops. By the time the cops caught up with the chase, they arrested both of them. By this time, the robber had thrown the knife away and the cops didn't take too much time looking for it. Consequentially, one of ours is likely facing higher charges due to the Nixons.

It is unfair in the same way that unrepentant cannabis users are denied parole due to their beliefs (not addicitons), while other more needful inmates deserving a chance at rehabiliation go wanting. While killers get parole, peaceful cannabis culturalists refusing drug treatment are denied parole and have to serve the length of their sentence. That's another story missed by APN. 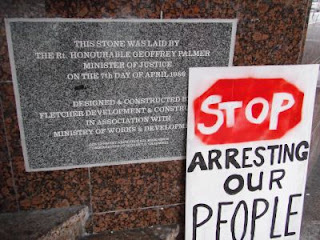 The last time Sir Geoffrey got stoned
I understand some media were attracted by the loud buzzing, as well as curious tourists. Maybe this old Maori woman in a wheelchair might have had a story to tell? Where's the harm?
No arrests either. I wish that were the case across the board, not just when protesters do it.

One of own couldn't make it. He was having surgery. This is him recovering at the club with a harm minimising vaporiser, of the sort that HRH NZ Customs Service are seizing at our borders right now: 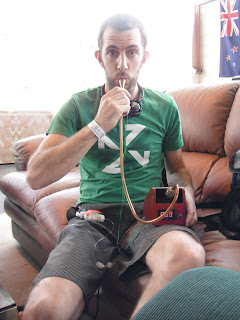 Do you really want to lock him up?
We're feeding our babies so much paracetamol, some of their livers are shutting down. Go on, arrest the hippy and keep selling painkillers like lollies in the supermarket check-out aisles, even if the deaths of paracetamol are under-reported compared with "illegal" drugs:

There are times I wish the MSM would go to pot. This was one of them.
Posted by Will de Cleene at 14:14