Looking at my karma score at DPF's over my comment on McCain's "choice" of VP, I'm pretty certain my level of sarcasm went unnoticed. I wasn't paying Palin a compliment. It merely confirms that McCain is a prisoner to the Religious Right of the Republican party. Of course, the VP was going to be a woman. It had to be, to catch the Hillary vote. But this woman? This woman is War.

I've just come back from an extraordinary day at the public conference on New Zealand & Australia's Secular Heritage and its Future:

The videos of the day's speeches should appear on the NZARH's YouTube channel sometime soon. The Oz speeches from their side is up there already.

Nicky Hager (pronounced Har-ger, not Hay-ger) spoke on the main threat of fundies in NZ. Strangely enough, the Exclusive Brethren are not the main worry. Nope, it's the threat of issues-based networking power that churches can pull on. A cohesive and compliant flock can provide the numbers for talkback, letter-writing and petitions. Meantime, the fragmented majority is too busy, too distracted, and loses its voice. It loses its power. The destructive nature of binding Citizens' Initiated Referenda struck home. In theory, they're great. True democracy, woohoo. In practise, not so good.

Dr Bill Cooke from Auckland Uni at Manukau spoke on whether NZ is a "Christian Nation". Short answer is no. Too many whalers and sailors, too many Scottish immigrants, too many free-thinking refugees escaping ecclesiastical straight-jackets. WWI finished off any chances of a religious nation state. Too many soldiers returned from the slaughter knowing there was no God. Even Mickey Savage's Applied Christianity was a Humanist nudge to the pragmatics of being thy neighbours' keeper.

I'd like to paraphrase more, but his hard copy transcripts were too popular. And as a half-stoned deaf witness, I acknowledge that I'd be doing the man an injustice by stuffing more inelegant words in his mouth. Suffice it to say, it was the second most impressive speech of the day, and you should give it a squizz when it comes online.

The best speech of the day went to the mesmerising Prof Lloyd Geering, the 90 year old Emeritus Professor of Religious Studies at Vic Uni. The Rutherford House lecture theatre PA was down, but the old pro rattled off a dissertation off the cuff on New Zealand's Contribution to a Secular Global World. He spoke an epic.

First, define what one is talking about; secular not secularist. Secularist is anti-religion, which in itself is just another form of dogma. A secular society allows pluralism, it relishes differing opinions, it encourages freedom of expression. Define religion. Tricky. Prof Geering took a wide interpretation, saying that religion is whatever gets you through the day (I'm paraphrasing wildly here). Spiritual mysticism ties in all the threads, from the Three Brothers of Isaac, Ishmael and Andrew to New Ageism, Satanism and Scientology. It even ties in NZ's Animist culture that Simon Upton and Colin James are fond of drawing attention to. Fair call. Everyone believes in something, otherwise you'd be a miserable git.

Much of New Zealand's immigration occurred after the religious zealots had already landed in Australia and Plymouth Rock. NZ's people came across in the age of Darwin. Consequentially, New Zealand is currently performing its secular duty very well. We are a skeptical people. Humbled and wounded by doubt, it is our triumph and our tragedy (OK, now I'm just making it up. I'll get hold of a transcript and post it separately later on if possible. Never trust the storyteller, only the story).

I do not do standing ovations often, but I gave Prof Geering one. Whether others did or not is not my concern. It gave me the courage to corner him during afternoon tea to try and put my fears to rest. Unfortunately, what he said put a chill up my spine. To explain exactly why, I'll have to back-track a bit.

I am fascinated with quantum mechanics. I don't understand it, but I know beauty when I see it. Take, for example, Feynman diagrams: 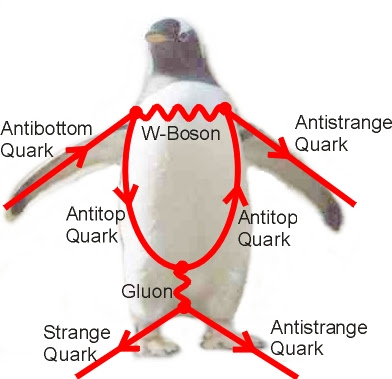 Combine this with Prof Feynman's admission over the Manhattan Project; when circumstances changed but they went ahead and built the atom bomb anyway, killing countless Japanese when the original fear and loathing was aimed at Hitler. This particular diagram has special meaning to me:

Hang on, I'll clean up the image, substitute the virtual pi's and stuff with alternative definitions:

Between the idea and the reality falls the shadow, but let's call it a squiggly line instead. Call it a neuron firing. Call it Yeah Right syndrome. Call it doubt. Fundamentalists, whether they be of Christian or Islamist stripe, short-circuit this process. There is no doubt. God is on their side. Therefore, they can do no wrong.

In the macroscopic world, we are blessed with Hubble photos showing the incomprehensible age of our universe. In the microscopic realm, calculus has surpassed standard observation to the point where even really expensive machines cannot keep up with the predictions of theoretical physics.

God as mental short cut provides certainty in a world of increasing complexity and uncertainty. Fundamentalism is on the rise. The idiot mullahs are bad enough, but surely the world's superpower is run by the most enlightened leaders? Which is where Sarah Palin comes in.

I'm not putting too much stock in the Wikipedia article to be honest, seeing how over 1500 changes have been made to her profile in the last 36 hours. The edits are very interesting. Lots of literary airbrushing going on. No more "widespread criticism for her handling of Matanuska Maid Dairy." The hard line "Palin is [[pro-life]], even in cases of rape and/or incest" has gone. The convictions are being wiped clean.

There is no room for uncertainty in Sarah Palin's mind. Hypocrisy is justified.

"Palin admits that she used marijuana at a time when the state had legalized possession of small amounts. She says that she did not like it and she does not support legalizing marijuana, concerned about the message it would send to her children."

"Palin said she's not out to judge anyone and has good friends who are gay, but that she supported the 1998 constitutional amendment. Elected officials can't defy the court when it comes to how rights are applied, she said, but she would support a ballot question that would deny benefits to homosexual couples."

So, back to what Prof Geering said to me. It was much along the lines of Blackadder Goes Forth regarding the origins of WWI: "It was just too much effort NOT to have a war." I'm too old for war, but I fear for my mates' kids. They may not be so lucky.
Posted by Will de Cleene at 21:55