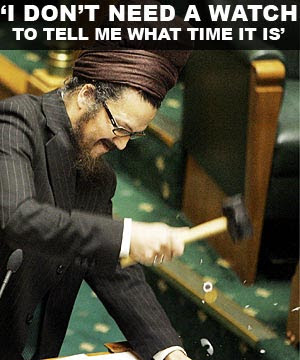 Valedictories are a chance for the more eloquent and observational of departing MPs to let rip and tear their soon-to-be-former colleagues another arsehole. That's if they have any guts. The suck-ups who are cruising for a tasty directorship or ambassadorial position, they'll puss out and deliver a bland meander through the portrait gallery instead.

It's the end of an era as Nandor clocks out of parliament in style (Full vid of speech here, highlights here). Only one other valedictory in memory comes close, Richard Prebble's when he left Act. While Prebs dressed down the House by telling a war story about an unrelated dead Prebble, Nandor did it his way.

I have a lot of time for Nandor, and it was interesting to see which MPs turned up to give him his last hurrah too. Hat tip to Parliament TV for approximating being there better than anticipated. Notice none of National's front row could be bothered attending. Simon "one more prison" Power not there. John "tasers set to stun" Key absent. In fairness, none of Labour's was there either, with the exception of Annette King who was speaking directly after Nandor and therefore moot point. No Rodney, no Heather. So thank you Kate Wilkinson, Pita Sharples, Darren Hughes and others for showing your respects. Benefit of the doubt to the MPs who were there by dint of whip only as well.

For Nandor Tanczos is worthy of respect. He broke the mould. So far out on New Zealand's long tail, he showed that representation went beyond the standard deviation. For an MP who never sat on the Treasury benches, Nandor accomplished more than most. And greater love hath no man, than to stand down for his party.

Nandor is a freak of nature. If someone had told you in 1987 that there would be an marijuana observant Rastafarian in parliament within a dozen years, you would have been able to bet good money against such outrageous odds. Yet, here we are, bidding farewell to this bloke who saw through to fruition the Seven Year Forgiveness law, the Prison Ombudman, the Waste Minimisation Bill (touch wood).

The freak factor is important. It's a sign of things to come. Our current crop of powermeisters cut their teeth on Vietnam protests, the women's movement, gay and Maori rights. Labour's ranks are consequentially full of unionists, wimmin, queers and racial minorities. Which is a bit of a bugger, because many of the issues that stirred up these fights have been won. The Employment Relations Act, Equal Opportunities, Civil Unions, treaty settlements. The future of activism, and therefore political success, lies with the freaks and geeks.

So this freak walks into the House for the last time, after some Nat spokesperson filled time with a warm congratulations for him. Several truths ensue.

Nandor speaks of a bunch of bastards and vultures. Great to witness the reaction by the MPs and the press gallery (all five of them) to those comments. The old man came out of parliament incredibly bitter in 1990. Nine years is long enough in that den of associations and betrayals. People walk in with the best of intentions and get ground up by the system. Alliances take the place of friendship, principles dissolved in pragmatism.

With all the complicated security arrangements that envelopes parliament nowadays, all the stickers, tags and wand waving, leaving it all behind must entail all the joy of escaping an asylum. So it is entirely reasonable but delightfully unexpected for Nandor to smash his watch up with a mallet, even if it did make the security staff flinch. No more tearing the day to shreds.

I was fortunate enough to be invited up to the Green's caucus room afterwards for drinkies. A picture of a barefoot Rod Donald sat above the drinks table, presiding over Sav Blanc, Pinot Noir, organic beer and a reasonable range of non-alcoholic beverages. Must say, they are a warm and welcoming bunch of people. Several chasms of difference were politely explored with malice toward none.

Dinner in Blair St was meant to be a politics-free event. After finding all my arguments returning to a political theme, I contented myself with listening to other people's stories and flirting with lesbians. We did our best Winston Peters impersonations, being the last table to leave as the waiting staff waited. Heh. Been there, done that. The night continued on into the wee hours. A big thanks for a great night.

All the very best, Nandor, to you and yours. Respect.
Posted by Will de Cleene at 20:31