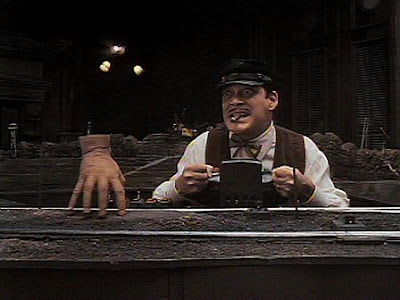 Well, hell. Labour's gone and bought the railways. Here's me thinking my mates have gone overboard for the sprogs with the Thomas the Tank Engine franchise (collect all thirty books!). Trainspotter Michael Cullen has bought the mother of all antique train sets. Not that this weighs greatly on the chattering classes, who will no doubt distract their toddlers with coos at the TV along the lines of, "Ohhh, look! Now you own a bit of that tank engine! No, that's not Thomas, that's... umm... Pig Iron."

Pig Iron cost a hefty margin above market value. Call it the election year premium. Cullen assures the public that there was a reason for buying the trains off Toll but has yet to tell anyone what it is. After four years of owning the tracks with little sign of improvement, the public reaction on running a clapped-out fleet of obsolete stock will change like a Christmas puppy in July once the bills start rolling in.

On the 7th August 1908, then-prime minister Joseph Ward took a bunch of MPs of the inaugural trip on the Main Trunk Line. I wouldn't be surprised to see history repeat itself this year. What a photo op. Only two-third of a billion dollars of someone else's money to win an election. Worth a go, eh.
Posted by Will de Cleene at 21:17