A few in the Blue spectrum are taking this graph from Rod Deane's site seriously: 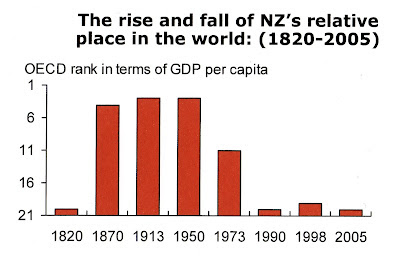 While the figures are no doubt entirely correct in the literal sense, the context in which they are used is laughingly misleading.

Remember New Zealand in 1820? Neither do I. Thankfully, Harrison M Wright's "New Zealand 1769-1840: Early Years of Western Contact" is at hand. Pages 23 and 24 enlighten us as to the source of New Zealand's Gross Domestic Product in 1820:

"Kororareka was a Maori settlement in the Bay which was later to become the
source of much contention as the principal rendezvous of visiting whalers and
the whipping boy of missionaries and their supporters...

"Whalers that visited the Bay of Islands anchored at Kororareka, since it was
the most convenient spot, and the number of vessels which did so increased
markedly about 1820...

"The white population at Kororareka apparently fluctuated around one or two
dozen for several years."

The next OECD ranking appears 50 years later, in 1870. By sheer coincidence, 1870 is also when the Otago gold rush had hit its peak.

Next stop is 1913, a quantum leap of 43 years. Refrigerated shipping had been bringing home the bacon for New Zealand around thirty years. From Michael King's History of NZ (pg 279):

The GDP pump of farming provides much the same reason as the next time jump, 37 years later in 1950. The post-war economy is pumping due to NZ farmers being the Allied's market garden during WWII.

The next randomly chosen year is 1973, the year the UK joined the European Union and we lost our beef and lamb buying power. It is the beginning of the end.

27 years later, in 1990, New Zealand has just been restructured to death. SMPs are gone, as are a range of tariffs that hid the true cost of things. Our comparative worth with the rest of the world is back to where it was when we once were whalers.

Apart from that, I pretty much agree with what Dr Deane was on about.