As Tom at WellUrban has kindly pointed out, the winner of the Intensity futurama for Wellington transport was not me. But it was. Not in the financial sense, but in the corny, syrupy way usually ascribed to Hollywood underdog movies. Nothing is more fun than trying to solve an impossible problem. You never know what you'll discover on the side.

Take, for example, the Throne of Wellington. It's high up near the top of the ridge above Government House. I discovered it one shitty morning when I was procrastinating on going to work. I was backtracking from Kilbirnie, in as near a straight line over Mt Vic towards the Basin Reserve in rain and a strong Nor'Wester head wind.

These days are great, as there's no-one else around and I can pretend I'm Bruno Lawrence in The Quiet Earth. That's the big difference between Orkland and Wellington. Sure, there are nice spots to sit and think up there, but there's two dozen other fucking people around trying to do the same thing. In Wellington, it is easy to be alone.

My shoes were soaked, it was near impossible to roll a smoke, and the spliff had almost worn off. I trudged down, eyes crying from the wind and there it was. The Throne of Wellington. It was a fallen stump hanging out over an expanse of gorse just below the ridge above Government House. Sitting up there, leaning into the wind and looking at over this beautiful land. Two seagulls sat hovering overhead, riding the currents for kicks. Nice.

But back to the competition. The 90-odd entries can be viewed at the State Insurance Building gallery until 5th October. It'll be good for a gander. For the record, I've posted my entry below: 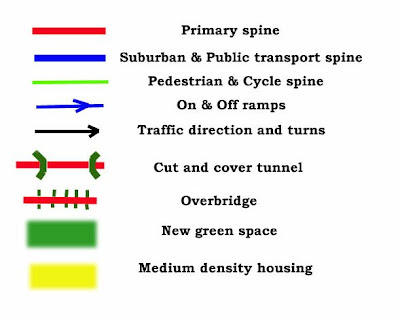 This plan lifts the airport to city traffic out of commuter and suburban traffic. Doing so allows the smooth and uninterrupted flow of traffic between these two points, while: including an iconic entrance to the city from the new tunnel providing enhanced access to Wellington Hospital. 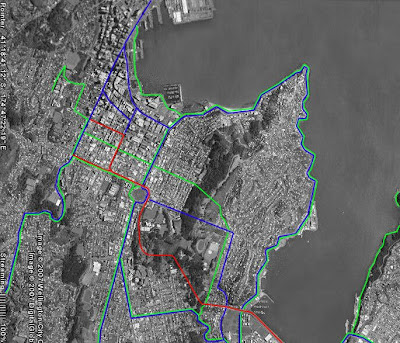 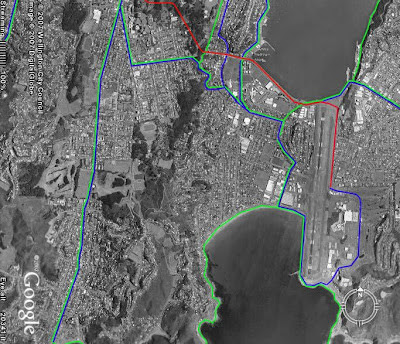 The new Link overbridge around the Basin Reserve will significantly lighten traffic flow on the ground, allowing vehicular traffic to use only the eastern half of the Basin border. Pedestrian and cycle traffic fits on widened footpaths or dedicated paths on the western side of the Basin, the street becoming a cul de sac for the student hostels and motel based there. The separation of motorised and non-motorized traffic minimises accidents while encouraging alternatives to vehicles.
Five Factors
1. Transport connections
New tunnel dedicated to airport and eastern suburb traffic allows existing Mt Victoria tunnel to become public transport and suburban route. Current bus tunnel becomes dedicated pedestrian and cycleway. 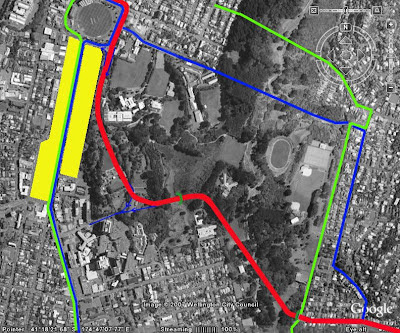 Cut and cover bypass tunnel, symbolising a momentary darkness to remember those for whom it is permanent. 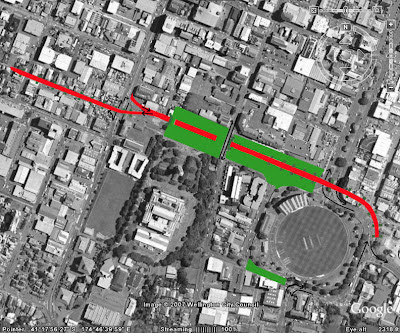