There can be only one (male co-leader)

There's one simple thing about the Green co-leader battle. It's age and guile vs. youth, inexperience and a bad haircut. Forget about Dave Clendon and Mike Ward. They are there only to fill the ranks. Expect one or both of them to drop out before judgement day. Hanging around any longer in the race risks damaging party stability. This is between Russel Norman and Nandor Tanczos, and my money's on Nandor. I know I'm betting against Chris Trotter and most other commentators, but I'll choose an underdog over the favourite any day.

If Rodney hadn't won the leadership, Act would not be in parliament now. Neither Franks nor Shirley had the visibility to sell the party at the election and neither had a shit show of winning an electorate. It's a stern lesson which the Greens would do well to learn from. Jeanette Fitzsimons has implied that Russel is her preferred co-leader, in much the same way Roger Douglas not so subtly backed Stephen Franks a few years back. While Norman has enough gingervitus to rekindle the likes of the late Rod Donald, he lacks the experience and depth of a parliament-hardened Tanczos.

Norman may be trawling for numbers around the grassroots circuit but it's popular visibility that counts in a leadership contest. The ability to bring out the warm and fuzzies does not translate as a party-saver and that's precisely what the Greens need to survive 2008 without Rod Donald. You can say many things about Nandor, but being invisible isn't one of them. He has long since put away his skateboard and grown into leadership potential this term. He has confounded Winston Peters on his home turf in the House and gained respect for his grasp of IT issues. His open and forthright views on the Corrections department left quite a few people looking at him with new respect.

Nandor shows no signs of slowing down either. In contrast to the Act leadership debacle, he has a policy platform and is not afraid to stand up for it. Calling the Greens Labour's lapdog last election is about as unequivocal as you can get. Strategically, this is a damned good platform. The Greens haven't got an electorate to hold firm with, so repositioning the Greens nearer the centre means a wider target market. It would allow, for example, the Greens to steal the BlueGreens vote from the Nats. It would also mitigate the scary watermelon factor that keeps otherwise keen voters offside.

Announcing this platform also leaves Norman little room to manoeuvre. He too wishes to distance the Greens from Labour but Nandor has already marked out the best territory. Norman's got nowhere to go but hard left, a sure sign for defeat next election. Matt McCarten's not promoting Unite out of altruism. He is setting them up to run in 2008, as DPF kindly points out. Vernon Small reckons that Norman will focus on the Social Justice ticket, which will be a hard row to hoe considering Nandor's the spokesperson for Restorative Justice. With six weeks to go before the final vote, I expect we'll be seeing a whole lot more action plan from the Rastaman.

Speaking of which, derisive comments on Nandor's dreads are practically a non-sequitur these days. Dr Sharples doesn't lose any mana from his mullet, since what comes out his mouth makes too much sense to squander on superficial trivialities. Meantime, Russel Norman seems quite keen on GE (goatee eradication): 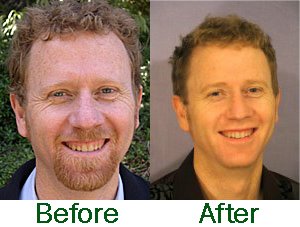 Finally, and I'm a republican not a nationalist, but I don't think an Oz dude who has been in the country less than 10 years should be a party leader. While Nandor is a Brit-born Hungarian, at least he spent most of his childhood here. I reckon you've got to acclimatise to this country a while before you can start bossing everyone about. 10 years does not cut it.

Anyways, I must be off. I've got to go book my seat at the Greens Conference in Silverstream over Queens Birthday weekend.
Posted by Will de Cleene at 17:58