Seems I'm not alone to objecting to pre-employment tests. A South Taranaki processing plant has noticed a drop in applicants since it introduced mandatory drug testing. Now I'm no businessman, but in a tight labour market the last thing one should do is unnecessarily raise the employment barriers.

Working on a freezing works chain is a boring, repetitive job. Surrounded by blood, guts and excrement all day may seem a challenge to most of us, but for those with the requisite dexterity and tenacity, the biggest challenge is not to go insane with boredom.

When I was banana picking in Northern Queensland a few years ago, I was surrounded by dope fiends and alcoholics. They were weird and strange, but only a very few were considered dangerous.

Banana humping is probably one of the worst jobs in the world. It consists of pulling 100kg bunches of bananas down while another worker uses a cane knife to chop the vine some ten centremetres above your head. The gush of nana juice feels like an elephant has pissed on you, irrevocably staining your clothes and body with pungent sticky sap. One then carries the unripe fruit on your shoulder to the trailer. In the shed, you take the cover off the banana bunch and hope a snake is not living inside, like these possums were. 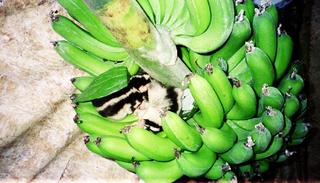 The cane knife is a machete-like implement which widens out to a 30cm width blade with a spike on the other edge:

Sharpened as often as a butcher's knife, these things could be lethal in a number of ways. I heard stories of a backpacker's face being cut off as she stood too close to one in mid-swipe, scalpings as the blade whizzed too low for the vine, hitting the back of the humper's head. One Brit backpacker on my team sliced his shin open with one.

The weather was a consistent 35-40 degree dry heat. You'd take a 6 litre waterbottle from the deep freeze at dawn. By 3pm you'd be finishing off the last lukewarm gulps from it. Tempers frayed easily. I witnessed a near-fatal argument between a father and son over fertilizer preferences. A Kiwi at home can safely talk about the weather for hours. In Northern Queensland, it's grounds for homicide.

Thankfully, I found a way of defusing such tempers by turning the rage onto the imminent Australian general election and discussing that eternal Charlie Brown of Oz Pols, Kim Beazley.

Away from the work of banana-picking, one's entertainment prospects were limited. Friday night involved the hostel people all chipping in for their preferred drink and emptying them all into a rubbish bin. 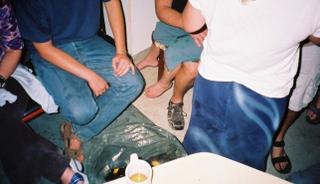 In such weird circumstances, the small madnesses prevented the bigger ones. I was stoned the whole time, watching and smelling the sugar cane fields on fire. There are worse ways to pass the quiet times. My bosses didn't care, as long as I did the job I was paid to do. As you do.

It's a lesson that employers had better click onto, whether they are police recruiters or freezing works. The important thing is that you hire the best people for the job, not discriminate based what they do to keep sane off-duty. As long as workers fulfil their function, it's NOYB; None Of Your Business.
Posted by Will de Cleene at 10:20