New Zealand has one of the finest collections of ugly architecture outside of the former or current socialist blocs.

Smaller examples of these can be seen in the residential housing stock, which has had recent problems with 'leaky housing', but many older dwellings can also be made uninhabitable through careful neglect. For example, I used to live directly under this 'house' in the Wellington suburb of Northland. Not pictured are the massive cracks in the foundations.

Dunedin's Scottish custodians of student rental stock have long been held to be the finest owner operator slum landlords in the country. This is a fearsome reputation to have, considering the vast bulk of New Zealand's rental housing pool was last refurbished when they were originally built.

Ugliness from neglect is one thing. Deliberate ugliness in design is another matter entirely. Some of the most awful buildings in New Zealand have been built under a National government.


This unique building is a remarkable New Zealand architectural object to be studied and analysed. It represents New Zealand's approach to innovation and creativity and contributes to the dynamic expression of the New Zealand identity.

Whereas I have always considered the building an eyesore, an ivory tower of bureaucrats lording it over their ratepayer minions. I never knew there was a garden at the top. It's not very visible, and it lacks the bravery and openness of Hundertwasser's vision.

The 1967-era building was probably the last time the Auckland Council's building has dominated its territory. The same cannot be said for the rest of the country. Go to any NZ town or village, and without fail, the newest, most over-built building on the main street will be the Council building.

The Palmerston North City Council building and Convention Centre was a battleship-sized eyesore foisted on Palmy by then-mayor Brian Elwood. It straddles the side of the Square which itself has more recently been turned into a giant slab of concrete. Nelson's Council has a Mini-me bomb shelter too.

The Beehive has long been recognised as one of the worst buildings in the world. Drawn on a cocktail napkin and reverse-engineered into a building, it is a terrible place to get drunk in. It is with some delicious irony that the prime minister who commissioned the eyesore ended up announcing a snap election in it before puking his ring out on the shit-brown carpet.

The Te Papa Museum in Wellington was designed with the intention of reflecting NZ's Pacific culture. It resulted in more of a Byzantine-style labyrinth. Not so much ugly aesthetically, more an ugly waste of space. So much more of the museum's treasures could have been on display if some sense of proportion has been brought to bear. 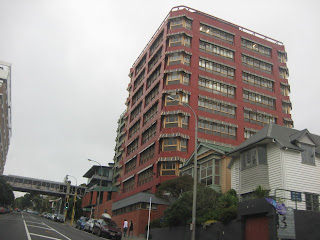 A sense of proportion is also missing from the Von Zedlitz building at Victoria University's Kelburn campus. Stairwells in impossible places, floor layouts that would make Escher or Kafka scream. If buildings had theme songs, Von Zedlitz's would be David Byrne's The Red House.

Please feel free to add your own suggestions for NZ's worst building in the comments.
Posted by Will de Cleene at 11:38