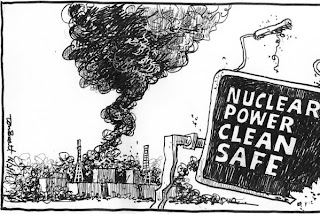 Tom Scott points to the perils of nuclear power. Simple enough valid criticism with hindsight and a 9.0 earthquake. Some perspective is in order. Keep that 9.0 earthquake in mind when reading what I wrote quite some time before the fact:


In the early 90's, I worked across the road from Paula Bennett's old job in Wairakei. The BP station there, the busiest in the country, sits next to the geothermal park. Wairakei is ten kilometres north of Taupo, which sits on the northern tip of Lake Taupo, the biggest caldera this side of Krakatoa. South of that, there's the three cones of Tongariro, Ngauruhoe and Tongariro. One's a casual smoker and one's a regular.

If a big earthquake hit this part of the volcanic plateau, seven shades of Michael Bay could easily occur. Wairakei would quite simply disappear, increasing the size of the existing Craters of the Moon attraction considerably. That in turn could stir up one of the three cones or even the stogie of Taupo.

I neglected to mention explicitly in that post the huge tanks of BP's LPG, petrol and diesel sitting right next to the geothermal plant. So stick a 9er up that and see what happens.

The fact remains is how does one light up Tokyo etc. then? David Farrar points to coal mining's corpses on Facebook, 50,000 in the last decade. Clearly, coal's cost benefit has a long long way to go before sanity prevails. I reckon coal should be cached now for more useful things in the future such as artificial diamonds or nanotubes. Burning coal right now seems to be the same as burning Euros or printing US dollars; wasteful and futile.

Tidal, solar and wind power have a long way to go as well before they are anywhere cost beneficial enough for prime time.

Now I'm as paranoid as anyone who was a teenager in the Eighties about nuclear meltdowns. I saw The Day After, same as Charlie Brooker. I knew what a 1 megaton bomb dropped on Palmy would look like in terms of likely blast zone and fallout cloud. I even starred in a play in high school called Nuclear Gameshow Olympics (I played Kampuchea), so don't talk to me about the hazards of nukes.

I still reckon there might be something worth looking at in thorium.