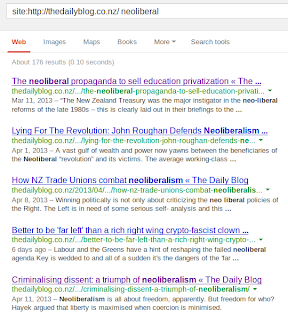 According to the Daily Blog, all of life's ills can be directly attributed to neo-liberalism. Since early February when the blog began, hardly a day has passed without neo-liberalism being wheeled out for a good old drubbing. In comparison, Marx has only appeared 35 times.

There is only so many ways you can arrange the words "Hate Neo Liberals" before it gets boring and repetitive:

Might I humbly suggest that the Daily Blog mixes things up a bit for variety. For example, anagrams of "Hate Neo Liberals" include:

Hone is Alterable
See Hairball Note
Alienable Others
Her Lot a Baseline
Ethereal Albinos
A Loneliest Rehab
A Relabel on Shite
Posted by Will de Cleene at 13:27