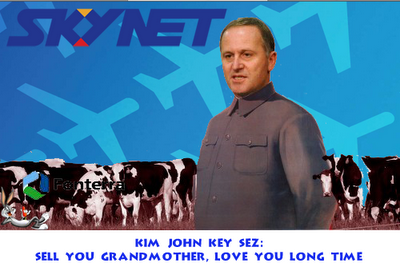 Fran O'Sullivan doesn't hold back in today's column, where she calls Key's commercially sensitive Pokie Addicts For Convention Centre deal a disgrace. She all but calls him a liar with this observation:


Yet the Prime Minister claims the expansion of pokie numbers will not materially lead to an expansion of problem gambling. He suggests this is because the casino operator is targeting international clients. He surely can't be serious...

Key should go down to the casino for a night or two and take a hard look at just who patronises the pokies. I had a look myself this week (and no, I do not have a "Chairman's Card" and nor am I an ambassador for the company). I simply went down to have a look through the operation and to see who was patronising the 1647 machines that are already at the Victoria St operation. They are not the kind of "international clients" who fly in to play on the gaming tables or in the VIP rooms, but housewives, solo parents and pensioners, with Maori, Pasifika and migrants over-represented among their ranks.

The whiff of cronyism hangs in the air like stale shrimp too. Every other National party event is held at Sky City. The undisclosed hookings of Mike Hosking, Paul Henry and other slebs moonlighting as Sky City mascots demonstrates how opaque and pervasive Sky City's machinations are. It is entirely likely that Sky City's shady tactics have been used during this latest round of government lobbying too, not that we'll ever hear about it seeing as how commercially sensitive the matter is being treated.

Mai Chen has advised that special pleading doesn't work when lobbying politicians, as their function is to look after the public good. That parliamentary convention seems to have been put aside by this unscrupulous National government, for the sake of John Key's Hokey Pokie convention centre deal.

The new complex will quite literally be built on the ruined lives of gambling addicts. And if Key disputes that, let him engrave his smiling waving visage on the front of every one of the 350 to 500 new pokie machines Sky City will install. Make him record the voice clips for all those armless bandits to tell the mugged muggles that they are a winner.

Somehow I don't think he will.
Posted by Will de Cleene at 17:34